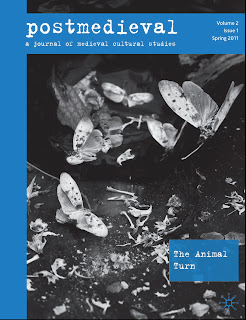 by KARL STEEL
And it's out! "The Animal Turn," edited by Peggy McCracken and yours truly, with an introduction by Cary Wolfe (our non-medievalist, most recently author of What is Posthumanism?), essays by Sarah Kay, Peter Travis, Gary Lim, Susan Crane, an epilogue by the editors, and a book review essay by Sarah Stanbury. The cover's by Margaret Inga Wiatrowski, about whose work I have brief things to say, here.
Pause here to join me in cheering for my co-editor Peggy McCracken, a perfect co-laborer, -investigator, -writer, and -thinker!
Through the end of March (2011), you may download the essays for free. We hope of course that your institution will subscribe to postmedieval; just as strongly, we (where we = Peggy and me and I presume the issue's assembled participants) hope that "The Animal Turn" finds its way into your syllabuses.
Topics covered include (SPOILER alert?):
I couldn't be prouder of this issue. Do us the honor of teaching it!
Posted by Karl Steel at 10:21 AM

That's weird. My institution has subscribed, records the journal being available electronically but its link for it just goes back to the print version's catalogue entry. I'll investigate, but meanwhile, firstly this looks very rich indeed, and secondly where may one download the essays for free? Either I'm being very stupid (always possible, as frequently demonstrated here) or else there is no download link either in your post or on the Palgrave page you link to...

Okay, sorry, I've found the link, in case anyone else was confused it's the Current Issue button in the sidebar. I told you stupidity was possible!

I just taught a seminar on animal studies in my Combined Honours course last month, we have already moved on to robots now in our discussion of human nature, but I will certainly pass this on for the keen students to (hopefully) read this year, and use it in next year's syllabus!