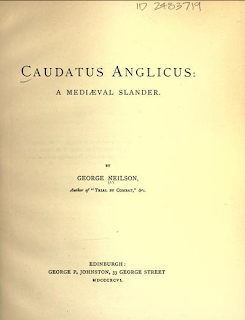 by KARL STEEL
Two discoveries today. This excellent review in The Nation of two books by Joanna Ruocco, Man’s Companions and The Mothering Coven, the latter of which has this:

Mr. Henderson takes the lettuce heart. He had always thought the physical universe had no shape at all, just a multi-directional nothingness with deep space objects floating around at varying speeds. He realizes that he has been ridiculous. All these dark folded places, opening everywhere at once—of course, that’s what the physical universe looks like.

All these dark folded places, opening everywhere at once. If this doesn't remind you of what we--especially Eileen--have been thinking and writing about of late, you've likely been reading another blog. Beautiful.

Second discovery. In HI&MiMB: ODM, Jeffrey has a nice fat footnote on the "abusive epithet of Angli caudati (tailed English)" (40) at 186-87 n84. So the existence of George Neilson's short, delightful Caudatus Anglicus: A Mediaeval Slander (Edinburgh, 1896) will not surprise him. Or perhaps you, especially if your surname is Heng or Weeda. But it did surprise me, as did its availability on archive.org: read it online! Send a copy to your Kindle! Steal Neilson's cadences, which sound like this:

Scotsmen and Frenchmen believed or professed to believe--which came to the same thing--that Englishmen were, in one particular, not as other men are. In consequence, an opportunity was frequently taken to refer to an alleged fact of natural history so interesting in itself, and so unpalatable to the persons reminded of it. Of course it was scandalously unfair to go, literally, behind the Englishmen's backs with any insinuation of the kind, but then we know that wherever there is racial antagonism fairness becomes a very secondary consideration.

Layamon's additions to the legend (lines 29587-600) are the point of chief contrast between his account and that of Wace. From Layamon we first hear of the nickname of Mugglings, and of the shame which the story occasioned not to the men of Dorsetshire or of Kent merely, but to Englishmen generally. Go where they might their faces were reddened by unkind reminders. Sarcastic foreigners could not be expected to display a tedious nicety in fine distinctions between English counties.