The Wolf Child of Hesse Betrays the Human: AVMEO Preview 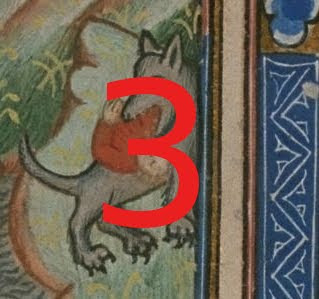 I've twice blogged (one and two) on the Wolf Child of Hesse, twice spoken on it, and will talk about him again on Friday as the first speaker at the GW MEMSI AVMEO (Animal, Vegetable, Mineral: Ethics and Objects in the Medieval and Early Modern Periods) conference.

1304. A certain boy in the region of Hesse was seized. This boy, as was known afterwards, and just as the boy told it himself, was taken by wolves when he was three years old and raised up wondrously. For, whatever prey the wolves snatched for food, they would take the better part and allot it to him to eat while they lay around a tree. In the time of winter and cold, they made a pit, and they put the leaves of trees and other plants in it, and surrounded the boy to protect him from the cold; they also compelled him to creep on hands and feet and to run with them for a long time, from which practice he imitated their speed and was able to make the greatest leaps. When he was seized, he was bound with wood to compel him to go erect in the manner of a human (or “in a human likeness”). However, this boy often said that he much preferred to live among wolves than among men. This boy was conveyed to the court of Henry, Prince of Hesse, for a spectacle.

I have a lot to say about this, primarily, as you might gather from my talk's title, about the postures the boy takes on and what this says about various ways of being in the world. I talk about the story's recognition of the boy as not quite passive and not quite active, about it's just failing to find a "middle voice." I condemn the "happiness script," the "straightening device" (see Sara Ahmed The Promise of Happiness, 91) the adult humans use to disorient the boy from the world and to orient him towards an unchanging heaven. I don't, however, want simply to cheer the boy being down in the muck with the wolves and to scorn the humans for being so intent on protecting their humanity. It's not so easy as that. Something is at stake in the boy's time with the wolves; something is at stake in our stances. I am trying, hesitantly, to get at something that's no doubt been discussed many, many times: the ethical stakes of horizontalist ontologies (to my mind, treated unsatisfyingly here, Vibrant Matter, 104).
What follows, then, is a sneak preview of the current state of the last paragraphs of my talk before the conclusion. If you'd like to argue, argue in comments, or hold your fire till Friday:
The wolves give the child the meliorem partem, the better part of the prey. The Hesse story might be read as one among several medieval stories of children suckled by carnivores, which themselves suggest the prelapsarian (or Messianic) state of human dominion over animals in the peaceable kingdom: just as the lion will lay down with the lamb, so too will human infants lay down with wolves. In this understanding, the child's innocence protects it, and his longing to be back among the wolves may belong to his wish to abandon his humiliated position in the corrupt world into which he's been cast.

We might decide, however, not to read the service the wolves do the boy as representing the honor they owe him as a human, but rather as representing the cherishing the wolves give the boy as a child or, for that matter, as a cub. He gets the best because he needs more. They acknowledge the different precarities between wolf and boy. We might call what they do a more responsible way of being in the world than the ways we watch the humans follow. To protect the boy, the wolves use what trees and other plants throw off; the human technocrats use wood, kill trees, treating the world as only as a set of objects made for human needs. This is a nice contrast, but I'd rather come at that meliorem partem some other way by not forgetting that it is meat. For the boy to be fed, something had to die.

the ecologies of significant others involves messmates at table, with indigestion and without the comfort of teleological purpose from above, below, in front, or behind. This is not some kind of naturalistic reductionism; this is about living responsively as mortal beings where dying and killing are not optional. (74)

Wolves appear rarely in the Erfurt chronicle material, but when they do, they eat people. The chronicle twice (here and here) speaks of an attack in 1271 in which wolves eschewed sheep and instead devoured 30 men, and once mentions a legend of the emperor Nero, who, as some say, fled Rome and succumbed to hunger and thirst in a forest, after which wolves ate his corpse (here). Note too that one manuscript of the Hesse story has the child raptus, not captus, by wolves, which then rapuerant their prey: snatching this child is like snatching any meat. For whatever reasons, something about this young meat strikes them differently; but the story does not forget that when wolves grab a human, they grab it--almost always--to eat it.
This may be a stretch: but if we take melior as not describing the portion size or the cut but as the quality, we might understand the meliorem partem as better than their usual run of meat: not sheep, but perhaps human flesh, better than animal flesh because of its purported great savor and nutritiousness, per any number of medieval imaginations of anthropophagy. I'm reminded of the fifteenth-century hunting manual of Edward of York, which observes that “man’s flesh is so savory and so pleasant that when [wolves] have taken to man’s flesh they will never eat the flesh of other beasts, though they should die of hunger.” I'm reminded, too, of a story I heard on Radiolab, where Barbara Smuts tells about her time among the baboons. Abandoning the pretensions of being only an observing subject among animal objects, she learns to sit like a baboon, to sound like one, and though a vegetarian, she finds herself salivating when she witnesses the baboon troop kill and dismember a young gazelle. She feels this as an encounter with her heritage; we might call it a different way of being in the world; we might also recognize that such differences frame our world differently, remaking certain parts as grievable and others not. Choices will be made, and Smuts' remapped salivary glands choose to betray both her vegetarianism and the gazelle.
Likewise, during his time with the wolves, how has the boy betrayed his humanity? How has he betrayed us? What has been the result of his disalignment from the noble hunters who enter the woods in their own way, imagining their own flesh to be not for eating, who kill some animals to eat, and kill others—wolves—as competitors, with the help of their own domesticated wolves?
(modified image from here, detail of New York, Columbia University, Burke Library at Union Theological Seminary UTS MS 051, f. 143, Eustace standing in the middle of the river with the lion and the wolf on either side, each with one of Eustace's sons in his mouth.)
Posted by Karl Steel at 12:26 PM

Great post, Karl, and I am gutted that I won't be there to hear the paper itself. I like your move from a traditionalist moralizing reading (natural vs. corrupt) to acknowledging the possibilities of "the different precarities between wolf and boy" (the point at which we move into an unstable, because unknowable, ethics of nonhuman care, from a chronicler's perspective) to the much more vexed question of the ontological status of the consuming and consumable mammals in the story.

A small matter: the bit of Latin not translated (_si in se esset_), is "if it were up to him," yes? Hope the paper goes well.

PS I note that the word verification for this comment is "cavegan," which I enjoy thinking of as the word "carnivore" being jumped on and trounced by the word "vegan."

Re: Smuts....interestingly there's a guy who did something similar with wolves. This was back in the 80s....if interested I can dig in the ol' memory pile and see if I can recover the memory.