the glimmer of fire portends

by J J Cohen
And count every beautiful thing we can see
(for 3/23, when I was in transit to Iowa)
No walk to Metro this morning, but a wet trip to National where I write this, awaiting the flight that will take me to Chicago, and then to Iowa City. The flow of human bodies (thick as gates ready their openings, swift trickles after flights depart) reminds me that everything is liquid. We are water transport mechanisms, but despite the vast beauty that our aqueous movements hold not all sweeps and surges exist to give the eyes pleasure. It is hard not to think of the indifference that inhabits everything flows.
Grey sky wet with fog, travelers with their breakfasts at a noisy cluster of tables (no one is talking, yet ambient human voices, constant murmur), and although my mind is already in a state I’ve never visited, I’m thinking back to last night, and Lady Tryamour.
Thomas Chestre’s Sir Launfal is the work of a hack. Read any of the criticism and you’ll discover the contempt in which he is held. He seems to possess a single adjective in his writer’s arsenal (sweet); he names a giant "Sir Valentine" and believes that such monsters dwell in Italy; he reads an abbreviation in his source not as a name (L. for Lanval) but as a number (the Roman numeral fifty). The contemporary of Chaucer and Gower, he is their Dan Brown, doomed to the popular.
And yet his English Breton lai knows of objects and their ways. A man is what he owns: his sword, his breeches, his shoes, his purse, his horse, his squire, his helm, his towels and basins and lodgings are what makes him. The fairy lady Tryamour, her name a medieval version of a James Bond film love interest, could be the most passive of objects herself … and yet it is she who teaches Launfal that objects precede identity, that when what owns melts like snow beneath sun (one of Chestre’s better metaphors), the nothing that is left includes the subject himself. Tryamour’s entrance is always preceded by a procession of lovely objects. She holds the power as well to make all objects recede, to gather them into the secrecy of that mysterious jolyf ile where she dwells.
Tryamour knows the secret lives of objects, how they flee from us at the moment we seek embrace.
and all the stars were crashing 'round 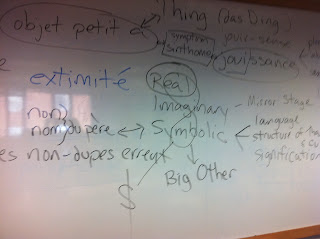 (for 3/30)
How can a seminar on objects and agency not include objet petit a, das Ding, the screen, the fetish, the materiality of negativity and lack, fantasy as the sine qua non, point de capiton, the rock of the Real, symptom and sinthome? So I included Slavoj Zizek's Sublime Object of Ideology on my syllabus, and taught the book for the fourth and last time. There was a time in my life when I could explicate Lacan's can opener graph of desire. That time has, I admit, passed. My first book would not have been possible without Lacan and Zizek's invitation to consider the knotted intricacies of subjectivity, identity, the misrecognitions that make us. I can't imagine working on medieval romance and not employing some of its tools. But as a total system, one in which the question is belief is omnipresent ... well, in the end it makes me feel like a Jew. And not the kind about whom Zizek's Sublime Object frequently jokes.
Today is dark, unseasonably chilly. Cherry trees are already in bloom. They seem ghosts when the light is this dim. On my way to campus I cataloged the trees and plants come to early life. Daffodils with yellow cups, daffodils with white. Weeds in urban cracks: crabgrass, dandelions, growings I can't place. I gave my mind to the world's minutiae because I did not want to compose this post. It seems a repudiation, no matter how I form its words. It isn't, there is no break, and yet I know that having written for the fourth and last time I'll be asked about what I've abandoned, rejected, left behind.
Even if Lacan and Zizek both argue that time doesn't work so simply, that the past comes to us from the future, not the other way around.
a map of desire
Emaré is a Breton lay that knows its sublime objects. Its heroine is a Constance-like figure who flees the incestuous embrace of her father, and finds properly connubial love in a distant kingdom, a family reunion in Rome. Yet its protagonist might also be a cloth so encrusted with stones that its forms a mobile lapidary. This cloth was woven by an emir's daughter as a gift to her future husband. It portrays three pairs of famous western lovers, with the maker and her fiancé the Sultan forming the fourth. This matrimonial cloth is taken in battle and bestowed by a father to his son, Tergaunte King of Sicily. He in turn gives the radiant cloth to King Artyus, Emaré's father, possibly (as Liz Scala suggests) as an unrecognized request for Emaré's hand. Artyus is blinded by the vibrant material ("And myght hyt not se, / For glysteryng of the ryche ston"): is it that he cannot see what the cloth displays, or that it exerts such a force of attraction upon him that its call to desire will draw him to obscenity? Artyus has the cloth fashioned into a robe for his daughter, intending to marry her when she dons this strange wedding gown. When Emaré refuses, she is placed in a boat and abandoned to the sea.
With swoon and tears, Artyus regrets his decision immediately. Once the robe ceases to "glyster," it seems, people are returned to the orbits of their ordinary lives. Yet the winds have already blown his daughter past the horizon, and the ships he sends to return her find no trace.
Emaré has the adventures we expect of a Constance figure, though she seldom invokes a faith in God to survive them. The good steward, the kind king who recognizes her nobility and takes her as his wife, the evil stepmother who forges letters to condemn her, the innocent and beautiful child, a reunion in Rome: all these things are in this lay. Yet so is Emaré's enthusiasm for class impersonation, imitating her childhood nurse Abro as she sews, embroiders, and creates clothing. In Rome she is rescued not by a senator (as in the analogues), but by a kindly merchant named Jordan. These interests in middle class identities and the liquidity of capital no doubt gesture towards the lay's audience: it is found after all in what is likely a merchant miscellany. It also suggests that the sublime object that propels the plot, the stone-encrusted and glimmering robe (which is, really, the shimmering promise of romance itself), is as available to those who hold parvenu identities as to the ancient aristocracy. By landmining the lay with names drawn from Arthurian myth (Artyus is a form of Arthur; Emaré is rescued by a steward named Kadore [Geoffrey of Monmouth's Duke of Cornwall, who raised Guenevere and whose son Constantine takes the throne upon Arthur's death]; Emaré marries the king of Galys, which could be Wales), the lay also suggests that the past is as transformable as the future.
Posted by Jeffrey Cohen at 9:36 AM

Alright, as one who has just taught Zizek, I'll bite (my students would expect no less). Why . . .?

You would think I'd have a clear and cogent answer, but I don't. The best I can say is that I am not finding Zizek and Lacan as useful to exploring the questions raised by my current research (on materiality, objects, agency and queer ecologies) as I do other (nonpsychoanalytically inclined) theorists -- Jane Bennett, Bruno Latour, Gilles Deleuze, and Graham Harman among them.

Maybe, to venture a big answer, they end up being too anthropocentric, and not very good for mapping the nonhuman world.