PS There was arm wrestling 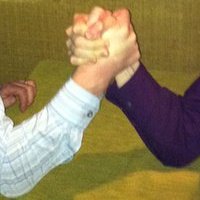 How it happened I am not certain, but I do know that the instigator was Kellie Robertson.

The first night of the AVMEO conference included a Venetian Room arm wrestling contest. Kellie and I were the first round; she won, handily. Fortunately there is no photographic evidence of this triumph since Kellie was the only person with a camera, and it's not as if I'd ever make this humiliating defeat public by blogging about it.

We all know that in the olden days scholars possessed freakishly well-developed upper arm strength from all the books they carried. Some of us wondered if the current wave of electronic publication has resulted in the wimpification of the next generation of intellectuals. Next up were two graduate students, Gerald and Lowell. I am sorry to say that when each match began I couldn't even tell that they were exerting themselves. I gave a puzzled look, then simply smashed their hands to the table in turn. Verdict: the next generation of scholars will barely be able to lift spoon to mouth to feed themselves, let alone carry any real books or manuscripts. I weep for those who come after us.
Posted by Jeffrey Cohen at 8:27 AM

Funny, Jeffrey, that you didn't note the way you shamelessly cheated during our arm wrestling the next night, when it became undeniably clear that I was going to beat you.

Wasn't Gerald the one who made you scream like a tiny little girl?

Myra, you were drunk at the time so I would not trust your memory.

Liza, you were drunk AND ill at the time so I wouldn't trust your memory.

and then of course I cheated the next night in thumb wrestling. I remember this conversation:

Jeffrey: You cheated!
Karl: It was a war.

Yes, Karl, that was the same night he cheated against me, just moments before your war. I rather enjoyed that, I confess. And Jeffrey, you were in no condition to be assessing others' physical state at the time.

I wasn't drunk -- that bar is too expensive for graduate students to be able to afford to get drunk. I'm never even tipsy there. I will admit to being ill, but I assure you it did not affect my memory of you screaming like a tiny little girl in the least.

I see that I'm obviously lucky to have escaped the MEMSI Titan's grip at Kalamazoo last year... and that he was obviously lucky Erica wasn't there :-) Watch out folks, three times is a tradition...