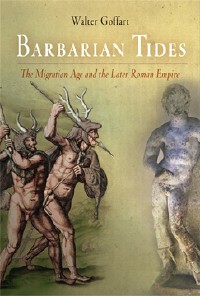 A new book just out by Walter Goffart is quite apropos, I think, to our recent discussion regarding whether or not the early Anglo-Saxons were apartheid-style racists. I append here the description of the book from the University of Pennsylvania website:

The Migration Age is still envisioned as an onrush of expansionary "Germans" pouring unwanted into the Roman Empire and subjecting it to pressures so great that its western parts collapsed under the weight. Further developing the themes set forth in his classic Barbarians and Romans, Walter Goffart dismantles this grand narrative, shaking the barbarians of late antiquity out of this "Germanic" setting and reimagining the role of foreigners in the Later Roman Empire.
The Empire was not swamped by a migratory Germanic flood for the simple reason that there was no single ancient Germanic civilization to be transplanted onto ex-Roman soil. Since the sixteenth century, the belief that purposeful Germans existed in parallel with the Romans has been a fixed point in European history. Goffart uncovers the origins of this historical untruth and argues that any projection of a modern Germany out of an ancient one is illusory. Rather, the multiplicity of northern peoples once living on the edges of the Empire participated with the Romans in the larger stirrings of late antiquity. Most relevant among these was the long militarization that gripped late Roman society concurrently with its Christianization.

If the fragmented foreign peoples with which the Empire dealt gave Rome an advantage in maintaining its ascendancy, the readiness to admit military talents of any social origin to positions of leadership opened the door of imperial service to immigrants from beyond its frontiers. Many barbarians were settled in the provinces without dislodging the Roman residents or destabilizing landownership; some were even incorporated into the ruling families of the Empire. The outcome of this process, Goffart argues, was a society headed by elites of soldiers and Christian clergy—one we have come to call medieval.
Posted by Eileen Joy at 1:06 PM

Thanks for blogging about Goffart's new book. I used him a lot for my M.A. thesis and tend to agree with his historiographical approach regarding the "barbarians." As you probably know, Patrick Geary is another one who has done much to re-interpret the historical understanding of the Germanic tribes. Anyway, I'm a regular reader and enjoy your site.

I agree with you about Geary, and I love his work. I recently heard him give a plenary talk at the Medieval Academy meeting in Miami [March 2005] related to modern "appropriations" of medieval archaeology [relative to nation-building] in eastern Europe--it was very provocative.

Love the post. I will have to check out the book. I only have more of a basic understanding of the period but know the various Germanic tribes were not very united at all and acted much more independently. my blog post on this