Of boys and farts

A conversation is unfolding at Confessions of a Community College Dean on how low brow kid lit might entice boys to read. Mad Magazine in the 1970s inspired that blogger, just as he hopes books like Walter the Farting Dog will addict his son to the crack that is literature.

I'm a big fan of the Walter trilogy myself (latest installment: Walter takes a disaster-bound cruise with his family and saves the ship from becalmed waters via the locomotive powers of his flatulence). The books are in fact artistically illustrated, and wry in their narrative style. Kid #1 also owns a plush version of Walter that makes hilariously obscene noises when you squeeze his bloated abdomen (see illustration above). 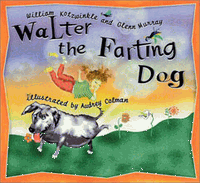 On the one hand, I believe that everything possible should be done to get boys and girls to read. If that means handsome books about gassy canines, then hoorah for gassy canines. On the other, I can't help thinking that a better strategy is to (1) make certain that well written, exciting stories for kids are easily available (Redwall anyone?) and (2) ensure that children grow up in households where they witness all the adult members reading for pleasure. In my experience, many of the parents who complain about their spawn's lack of interest in reading have a hard time naming the last novel they devoured with joy.

My worry is that when boy's lit is a genre defined solely by bodily humor and animals with attitude, it becomes too much an extension of the same commercialized boy's world where you are supposed to enjoy sugary beverages in colors not known to nature; eat snacks that have flavors best described with modifiers like "radical" and "extreme"; dislike school; wear your hair spiked and keep your tongue sticking out of your mouth (didn't spiked hair die out ten years ago?). At least, that's what I've learned from candy wrappers and soda commercials.

I don't mean to seem like a (pardon the pun) old fart. I do, after all, teach Chaucer. And I really enjoy gross humor, especially when it is both sophisticated and gross. But I do wonder what happens when the majority of marketing towards boys assumes that it's all about farts, underwear, poop, X-Treme Green slurpies, boogers and slime. How can kids be subversive when the dominating message is the same as what used to be the secretly whispered one?
Posted by Jeffrey Cohen at 1:17 PM

See, I remember reading all sorts of trash when I was younger. I read good stuff too, but lots and lots and lots of trash (I was a bibliophile early on and couldn't be caught *without* a book). And I look back now and actually regret that. I wish I hadn't been introduced to the trash, because it was harder to break away from that. I liked the good stuff too and would have eaten that as voraciously had the trash not been there too.

It strikes me as a little silly that at such a young age you have to entice kids with bad lit (I dunno, though, maybe this "low brow lit" isn't really as bad as some of the stuff I was reading). There's so much good stuff out there that has survived because it's so lovable. And if we really gave kids the chance, there's a lot they'd love too.

Could someone make something like this up?? It's on Amazon, and it is a bestseller. i kid you not.