Postcard from the New Chaucer Society 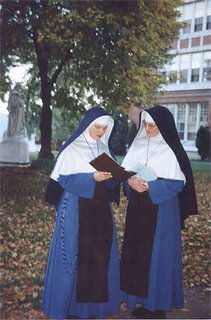 My postcard is in fact a snapshot of Patsy and Edina at NCS. I don't know when they became so dour, but a serious Chaucer conference will do that to even the most festive among us.

David Wallace's presidential address ("New Chaucer Topographies") would have interested many of this blog's readers, especially with its postcolonial swerve towards the end. He also mentioned that the Chaucer blog is probably scripted by an ABD Langlandian. Ouch.

A panel on "What is Happening to the Middle Ages?" was also intriguing. Carolyn Dinshaw spoke at length about multiple and heterogeneous temporalities. James Simpson launched a good argument against the ghetto of easy periodizations. Stephanie Trigg's paper on the thin (and probably more fantastic than real) line between medieval studies and medievalism studies was bracing. Surprisingly, no one mentioned blogs other than as a quick joke (Wallace) or as a quick advertisement (introduction to Trigg).

An enjoyable evening of drinks with some of my favorite bloggers and blog-haunters convinces me that a much of what is happening to the Middle Ages isn't unfolding in traditional spaces, and is being catalyzed by the profession's youngest, smartest and newest members.
Posted by Jeffrey Cohen at 9:51 AM

How hard can it be to be an english teacher, really?

It’s pretty much a breeze, Bill, once you get that Ph.D. (average time to degree in the US: 8.9 years). Lattes, plenty of golf, six-hour weeks, plush offices, first-class travel, and more money than any one person can figure out what to do with.

3) Certain medievalists in New Haven are just not that into hugging.

I tried to hug Lee Patterson in 1990, after having read Negotiating the Past, a book that only a very great man could have written.

It didn't go as well I had hoped.

Abd Lang'Lan-din? The writere of the grete and influentiale booke of astronomie translated yn to latin by William of Moerbeke. Ywis, that ys not I!

Untraditional spaces, eh? Somehow I think that our preferred local tavern is more traditional than one might think.

We're very glad that you made it to NYC.

Raising my head above the choppy waters of paper revision to second JKW's comment -- very, very glad you made it to NYC, and that we were all able to meet you, not to mention introduce you to one of our favorite haunts here in the city. It was a lovely time.