The Future: A Narrative of Hope, Dread, or Wonder 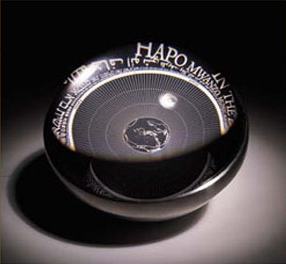 The image at left is of the Rosetta Disk, one of the projects of the Long Now Foundation, which, in their own words,

was established in 01996 to develop the Clock and Library projects, as well as to become the seed of a very long term cultural institution. The Long Now Foundation hopes to provide a counterpoint to today's "faster/cheaper" mind set and promote "slower/better" thinking. We hope to creatively foster responsibility in the framework of the next 10,000 years.

The name came from one of its founding board members, Brian Eno, who, when he "first moved to New York City . . . found that in New York here and now meant this room and this five minutes, as opposed to the larger here and longer now that he was used to in England. We have since adopted the term as the title of our foundation as we are trying to stretch out what people consider as now."

It might interest readers of this blog to know that, in addition to such high-tech persons as Esther Dyson and Michell Kapor (Lotus Development Corp.) serving on Long Now's board, their board also includes Michael Keller, a musicologist and Stanford University's chief librarian. Probably the best essay written on the Long Now Foundation is by the fiction writer Michael Chabon, "The Omega Glory," where Chabon writes,

The Sex Pistols, strictly speaking, were right: there is no future, for you or for me. The future, by definition, does not exist. "The Future," whether you capitalize it or not, is always just an idea, a proposal, a scenario, a sketch for a mad contraption that may or may not work. "The Future" is a story we tell, a narrative of hope, dread or wonder. And it’s a story that, for a while now, we’ve been pretty much living without.

In relation to much of what we have been debating on this blog, and even in relation to JJC's recent posting of his "notes toward a review" of Peter Haidu's book The Subject Medieval/Modern, Chabon is worth quoting here a bit more at length:

In the aggregate, then, stories of the Future present an enchanting ambiguity. The other side of the marvelous Jetsons future might be a story of worldwide corporate-authoritarian technotyranny, but the other side of a post-apocalyptic mutational nightmare landscape like that depicted in The Omega Man was a landscape of semi-barbaric splendor and unfettered (if dangerous) freedom to roam, such as I found in the pages of Jack Kirby’s classic adventure comic book Kamandi, The Last Boy on Earth (1972-76). That ambiguity and its enchantment, the shifting tension between the bright promise and the bleak menace of the Future, was in itself a kind of story about the ways, however freakish or tragic, in which humanity (and by implication American culture and its values however freakish and tragic) would, in spite of it all, continue. Eed plebnista, intoned the devolved Yankees, in the Star Trek episode “The Omega Glory,” who had somehow managed to hold on to and venerate as sacred gobbledygook the Preamble to the Constitution, norkon forden perfectunun. All they needed was a Captain Kirk to come and add a little interpretive water to the freeze-dried document, and the American way of life would flourish again.

I don’t know what happened to the Future. It’s as if we lost our ability, or our will, to envision anything beyond the next hundred years or so, as if we lacked the fundamental faith that there will in fact be any future at all beyond that not-too-distant date. Or maybe we stopped talking about the Future around the time that, with its microchips and its twenty-four-hour news cycles, it arrived. Some days when you pick up the newspaper it seems to have been co-written by J. G. Ballard, Isaac Asimov, and Philip K. Dick. Human sexual reproduction without male genetic material, digital viruses, identity theft, robot firefighters and minesweepers, weather control, pharmaceutical mood engineering, rapid species extinction, US Presidents controlled by little boxes mounted between their shoulder blades, air-conditioned empires in the Arabian desert, transnational corporatocracy, reality television—some days it feels as if the imagined future of the mid-twentieth century was a kind of checklist, one from which we have been too busy ticking off items to bother with extending it. Meanwhile, the dwindling number of items remaining on that list—interplanetary colonization, sentient computers, quasi-immortality of consciousness through brain-download or transplant, a global government (fascist or enlightened)—have been represented and re-represented so many hundreds of times in films, novels and on television that they have come to seem, paradoxically, already attained, already known, lived with, and left behind. Past, in other words.

This is the paradox that lies at the heart of our loss of belief or interest in the Future, which has in turn produced a collective cultural failure to imagine that future, any Future, beyond the rim of a couple of centuries. The Future was represented so often and for so long, in the terms and characteristic styles of so many historical periods from, say, Jules Verne forward, that at some point the idea of the Future—along with the cultural appetite for it—came itself to feel like something historical, outmoded, no longer viable or attainable.

In his book, which JJC quotes in his post, "Peter Haidu, The Subject Medieval/Modern," [and I re-quote here] Haidu writes that "literature," broadly-speaking, does "the ideological work of . . . polity in exploring and constituting subjectivity by providing performative models of human comportment" (p.5), and in response, JJC wonders if [or rather, avers that] this very same literature also gives us access to the ways in which certain "voices" confound and undercut that ideological work, and he concludes his "notes" with the idea that the

memorialization of and affiliation with voices that might otherwise have been lost--voices that strain to be recognized in their desires, in their humanity, even after such things were denied them in life--seems to me among the best things a medievalist's engagement with the past can achieve. Whether the modern subject is medieval and the medieval subject modern is, in the end, beside the point (how could they really have been otherwise?) What matters more are the exclusions from full subjecthood upon which the modern and medieval notions of the human are based, and the tools we have at hand (including history) that might yield a more capacious, less violence-limned and affirmative conception of what "human" really means.

And I would add here that, by way of answering my own question regarding what, in light of all our possible futures [catastrophic or not, thoroughly technocratized or not, transhuman or posthuman], the best humanistic scholarship might be, that it will, of necessity [my opinion, granted] have something to do with writing a multi-vocal, heterogeneous counter-history of that thing called a human self, and then deciding what is valuable enough in that history to fight for its protection and extension into the future. And it won't just be about "affiliation" with "voices that might otherwise have been lost," but must also be about voices actually lost and gone missing--those that were, and also those still-to-be [medieval studies will have to be about, then, in the words of Emile B. in a soon-to-be-published essay, not only "what was" but "what will have been"--unrealized futures]. It will also be about recognizing, not just the marginalized voices that run counter to, and undercut, the prevailing ideologies, but also understanding all the ways in which the scholar's thinking & writing is also a type of counter-historical movement that seeks to represent, not only what was, but what will, and can, be. And I think, too, that this will have to be a collective project, even, a communitarian one.
Posted by Eileen Joy at 3:51 PM

That was a fascinating post. I feel fortunate that I was able to get done yesterday everything I needed to accomplish at my office (approve those research account reimbursements! validate those GTA forms! let the travel funds be disbursed! I was drunk with sheer power). It was satisfying to be able to read your post over a few times, and to follow the links.

A project related to the 10,000 Year Clock, but not animated by the same hopefulness, is The Universal Warning Sign: Yucca Mountain. This contest and a related exhibit were launched to warn survivors away from a nuclear waste deposit 10,000 years in the future, when all human languages are perhaps gone. Intriguing idea, to wonder if architecture can communicate across eons, after language and history have been forever lost. Here is the rationale:

The purpose of the warning sign is to deter intentional or inadvertent human intrusion or interference at the site and to effectively communicate over the course of the next 10,000 years (the projected duration of the volatility of the waste) that the integrity of the site must not be compromised in any way in order to safeguard humanity from the release of the radiation contained within.

I prefer the optimism of the Long Now rather than the apocalyptic dread of this art exhibit, but I admit I have absolutely no idea what a future of 10,000 years can possibly bring; it is so inconceivably distant that it brings my mind only to the past (I don't think of the Jetsons or Star Trek; I do think of the Neolithic period and its meager leavings. I suppose that means I do suffer from insufficient optimism.)

The essay by Michael Chabon was engaging. I've quoted from him on this blog previously. What I like about the "The Omega Glory" is its giddy demonstration that Chabon can think about futurity with the same openness and awe that he brings, from time to time, to his contemplation of the past. If I may put in yet another plug for him, his book Summerland is the kind of glimpse at alternative but weirdly proximate worlds that will whet any kid's desire for nonlinear futures. It, along with Phillip Pullman's His Dark Materials series, is Kid #1's favorite summer reading.

Eileen, you are exactly right with your appeal to the medievalist to consider " voices actually lost and gone missing," and your imperative to engage, communally, "not only what was, but what will, and can, be."

That's it, I'm off … with plenty to think about, a deep appreciation of the conversation you've started.

Jeffrey--thanks for kind words and encouragement. I love "Summerland," too, by the way, having listened to it on tape last summer when I was driving back and forth between St. Louis and Myrtle Beach. Enjoy the pink sands of Bermuda . . . you bastard!