Is Identity a Fate or a Choice? 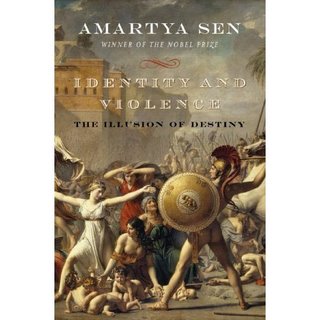 Relative to our discussions of humanism and "being human," and also psychoanalysis, transference, and self-Other relationships, I have just read a review of what looks to be an extremely interesting book by the Nobel Prize-winning economist and social philosopher Amartya Sen, Identity and Violence: The Illusion of Destiny, and I also append here a link to the review of that book that recently appeared in Prospect: "Illusions of Identity" by Kenan Malik.

I will quote here briefly from the review:

At the heart of the book is an argument against what Sen calls the communitarian view of identity—the belief that identity is something to be "discovered" rather than chosen. "There is a certain way of being human that is my way," the Canadian philosopher Charles Taylor wrote in his much-discussed essay "The Politics of Recognition." "I am called upon to live my life in this way." But who does the calling? Seemingly the identity itself. For Taylor, as for many communitarians, identity appears to come first, with the human actor following in its shadow. Or, as the philosopher John Gray has put it, identities are "a matter of fate, not choice."

Sen will have none of it. "There are two issues here," he says when I meet him at King's College, Cambridge, where he was master until returning to Harvard two years ago. "First, the recognition that identities are robustly plural and the importance of how one identity need not obliterate another. And second, that a person has to make choices about what relative importance to attach, in a particular context, to their divergent loyalties and identities. The individual belongs to many different groups and it's up to him or her to decide which of those groups he or she would like to give priority to." We are multitudes and we can choose among our multitudes.

Sen has been a vocal critic of "multiculturalism," but only when it is inflected in such a way that it assumes certain persons will act/think a certain way based upon the "group" to which they supposedly "belong." On this point, relative to social policy in Briatin, Sen has said, "We have a system in which Muslim organisations are in charge of all Muslims, Hindu organisations in charge of all Hindus, Jewish organisations in charge of all Jews and so on. . . . In downplaying political and social identities, as opposed to religious identities, the government has weakened civil society precisely when there is a great need to strengthen it." Sen, in other words, is wary of identity politics.

Here, also, is a link to an excerpt from Sen's book, published in Slate: "What Clash of Civilizations?" Here is a brief bit from that, that touches upon medieval history:

. . . . the frantic Western search for "the moderate Muslim" confounds moderation in political beliefs with moderateness of religious faith. A person can have strong religious faith—Islamic or any other—along with tolerant politics. Emperor Saladin, who fought valiantly for Islam in the Crusades in the 12th century, could offer, without any contradiction, an honored place in his Egyptian royal court to Maimonides as that distinguished Jewish philosopher fled an intolerant Europe. When, at the turn of the 16th century, the heretic Giordano Bruno was burned at the stake in Campo dei Fiori in Rome, the Great Mughal emperor Akbar (who was born a Muslim and died a Muslim) had just finished, in Agra, his large project of legally codifying minority rights, including religious freedom for all.

The point that needs particular attention is that while Akbar was free to pursue his liberal politics without ceasing to be a Muslim, that liberality was in no way ordained—nor of course prohibited—by Islam. Another Mughal emperor, Aurangzeb, could deny minority rights and persecute non-Muslims without, for that reason, failing to be a Muslim, in exactly the same way that Akbar did not terminate being a Muslim because of his tolerantly pluralist politics.

The insistence, if only implicitly, on a choiceless singularity of human identity not only diminishes us all, it also makes the world much more flammable. The alternative to the divisiveness of one pre-eminent categorization is not any unreal claim that we are all much the same. Rather, the main hope of harmony in our troubled world lies in the plurality of our identities, which cut across each other and work against sharp divisions around one single hardened line of vehement division that allegedly cannot be resisted. Our shared humanity gets savagely challenged when our differences are narrowed into one devised system of uniquely powerful categorization.

Perhaps the worst impairment comes from the neglect—and denial—of the roles of reasoning and choice, which follow from the recognition of our plural identities. The illusion of unique identity is much more divisive than the universe of plural and diverse classifications that characterize the world in which we actually live. The descriptive weakness of choiceless singularity has the effect of momentously impoverishing the power and reach of our social and political reasoning. The illusion of destiny exacts a remarkably heavy price.

This post on Sen's new book reminds me that I've been meaning to recommend a book to those interested:

Leary, M. R. (2004). The curse of the self: Self-awareness, egotism, and the quality of human life. New York: Oxford University Press.

This is a very nice challenge to the idea that the self is anything but a barrier to living well/happy/contented/calm/and so on. You might think, "Oh, how Zen-like," but this is a book that grounds arguments against the having of a self in (mainly) western contexts--ranging from genetics, the history of human civilizations, and neuroscience. This book is not without its problems, but it's genuinely provocative.