My favorite sculpture in Washington is the bearded head, arm, foot and knee that burst through the earth at Hains Point, a peninsula of a park not far from downtown DC. Created from cast aluminum by J. Seward Johnson Jr., this monumental piece is at once cosmic, comic, fascinating, and fearful -- really, the definition of sublime. 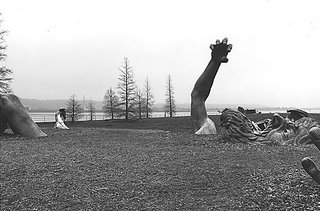 I post this because Kid #1 had his first sighting of the statue today. His camp made a pilgrimage to the Spy Museum, then ate lunch at this park by the Potomac. The giant has so captured his imagination that he can't stop thinking about it, even at 9 PM when his father has told him three times to go to sleep.
Posted by Jeffrey Cohen at 8:55 PM