I am writing you this letter to ask you to cease and desist in your commercial use of medieval Vikings, barbarians, and other louche fellows.

Although I understand very well that these ruffians are meant to be symbolic representations of "the pain and tribulation that a credit card user feels when they [sic] have to pay high interest rates", I feel that you do a grave injustice to the early Middle Ages in offering such an unnuanced view of ancient proclivities towards raiding and pillage. As a medievalist I am well aware that the Normans (for example) were originally the "Northmen" or Vikings who besieged much of Britain, Ireland, and the continent. But to be fair to pirates in general as well as to medieval marauders in particular, it should also be noted that the Normans were in their later days the so-called civilizing force that Europeanized Europe! Do you like the Song of Roland? Good for you, you show some class. Let me tell you that this supreme masterpiece of human achievement was written down in England in ANGLO-NORMAN, the French spoken by the descendants of these wallet thieving corsairs. 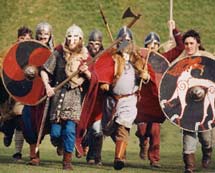 You may argue that Capital One's roving bands of malcontents are not Normans or Vikings at all, but are generic barbarians. If you do assert this thesis I will be surprised. But I will also heckle you as laughably Roman-centric, because you will have demonstrated that your innate worldview is positioned from the Mediterranean looking north. This was the same worldview adopted by the Venerable Bede, who should have known better. So-called barbarians have been paying the price ever since, because their story has always been told by those who judge them as sorely deficient by their own culture-bound standards.

To the Romans, just as to the Greeks, barbarians were simply those uncouth and margin-dwelling people who did not speak Latin or Greek. The reality is that such people undoubtedly possessed sophisticated cultures, but because they were dismissed as feral or "Latinized" into proper citizens this culture is mainly unrecorded. As Peter S. Wells has demonstrated in his excellent book (The Barbarians Speak: How the Conquered Peoples Shaped Roman Europe), however, the indigenous Europeans [as they are better labeled] left a material record of "settlements, graves, ritual places, pottery, and personal adornment" that, in the absence of texts, speaks eloquently on these peoples' behalf (ix; cf. 22-23). Indeed these groups met the Romans at frontiers where a vivacious cross-cultural dynamism transformed indigenous Europeans and Romans alike.

Such is my polysyllabic way of letting you know that your primitive and thuggish depictions of barbarians do a violence to history by flattening it beyond subtlety. I ask you to grant these groups their full complexity, a first step towards which might be having the spokesbarbarian no longer declare the tagline "What's in your wallet?" in a seriously poor Cockney accent. I should also note that a search at your website for the word "barbarian" returned no results, a missed opportunity for pedagogy that nearly made me weep.

Thank you for your consideration, and I am very sorry that I was tardy with my last payment. Could you please refund the $120 late fee and return my interest back to whatever it was before it shot to 23.7%?

Jeffrey J. Cohen
Medievalist
Posted by Jeffrey Cohen at 10:00 AM

Brilliant post -- I was just getting annoyed by those commercials the other night. Good to have a reason to laugh about it this morning.

The perpetuation of the "Dark Ages" as a mode of perceiving the early Middle Ages is virtually assured in the modern imagination, it would seem. At least, given the thematic concerns of Old English, we're familiar with the terms of hopeless battles.

Which is another reason that the Dark Ages T-shirt over at Geoffrey Chaucer's blog is one of my favorite lines on the subject of all time. Horned helmets indeed.

Harh. Very funny, and lord knows that such portrayals--the MA as the locus of everything bad--is hardly limited the Normans and assorted Goths.

Quick note as I unpack, catching up when I have a chance. I'm reminded of a recent epistolary complaint that I read, laughing outloud, in a chain bookstore in Liheu, on Kauai, while my spoused Other tried to track down what fish we'd seen in our snorkling.

That complaint can be found in George Saunder's In Persuation Nation, which is sort of like Atwood's Oryx and Crake, but with a lighter touch (i.e., w/out the Marburg or Ebola). An excerpt:

--
We are very sorry to receive your letter of 23 Feb., which accompanied the I CAN SPEAK ™ you returned, much to our disappointment. We here at KidLuv believe that the I CAN SPEAK! ™ is an innovative and essential educational tool that, used with proper parental guidance, offers a rare early-development opportunity for babies and toddlers alike. And so I thought I would take some of my personal time (I am on lunch) and try to address the questions you raised in your letter, which is here in front of me on my (cluttered!) desk.

First, may I be so bold as to suggest that some of your disappointment may stem from your own, perhaps unreasonable, expectations? Because in your letter, what you indicated, when I read it? Was that you think and/or thought that somehow the product can read your baby's mind? Our product cannot read your baby's mind, Mrs. Faniglia. No one can read a baby's mind. At least not yet. Although we are probably working on it! What the I CAN SPEAK ™ can do, however is recognize familiar aural patterns and respond to these patterns in a way that makes baby seem older. Say baby sees a peach. If you or Mr. Faniglia (I hope I do not presume) were to loudly say something like: "What a delicious peach!" the I CAN SPEAK! ™, hearing this, through that hole, that little slotted hole near the neck, might respond by saying something like "I LIKE PEACH." Or: "I WANT PEACH."
--

Ahhh, I presented a paper on the Capital One commercials at Kalamazoo this year. It should be going to press soon -- let me know if you'd like an offprint when it does!

Thanks one and all for the comments.

Liza: would love to see you in DC. I'm in the English Dept. office the 22nd, but then at a chair's retreat much of the rest of the week. 29th is possible too. Let me know -- I'll even take you out to lunch.

Karl: what is up with that picture?? are you on controlled substances again?

Morgan: I would be VERY grateful for an offprint -- sound sterrific.

I was as sober as a monk the whole trip until the last night. But then, the drinks were free, and I didn't have anything to do the next day but float about staring at fish.

Why do we always expect commercial and popular culture representations of the so-called "premodern" world and "premodern" cultures to be accurate? I thought JJC's letter was very funny, too, while I also appreciate its re-education angle, but marketers never pretend to anyone they represent the truth of anything. The fact that everyone "gets" the Middle Ages so wrong all the time gives us more interesting work. Speaking of which, fellow BABEL-er Steve Guthrie [medievalist at Agnes Scott College] has an article just published in Medieval Perspectives 19 on the distorted uses of the word in medieval viz. its deployment in "news" discourse re: Saddam Hussein/Iraq, the Bush Administration, and al Queda. It's brilliant!

I'm not (as all and sundry have probably guessed) all that invested in modernity getting the medieval right ... because there will always be as many medievalisms as there are modernities, and I'm not so self confident that I can even declare that I know what a proper or accurate Middle Ages is.

That said, I do admit that from time to time it is fun to unleash the Scolding Inner Schoolmarm.

Eileen: The fact that everyone "gets" the Middle Ages so wrong all the time gives us more interesting work. Speaking of which, fellow BABEL-er Steve Guthrie [medievalist at Agnes Scott College] has an article just published in Medieval Perspectives 19 on the distorted uses of the word in medieval viz. its deployment in "news" discourse re: Saddam Hussein/Iraq, the Bush Administration, and al Queda. It's brilliant!

That looks fascinating, thanks for pointing it out! The comment also reminded me of another article that worked with a modern usage of the medieval in the news media that I liked quite a bit -- Kathleen Davis' "Time Behind the Veil" in The Postcolonial Middle Ages (edited by JJC), on the CNN news "Behind the Veil" special and Chaucer's Man of Law's Tale -- I don't have it on me at the moment (ah, the joys of being in one state when half the stuff you need is in another), but I do recall that the first part on the CNN special was great, and the final page or so was really eloquent on why the modern usage of the term "medieval" matters.

JJC: I'm not so self confident that I can even declare that I know what a proper or accurate Middle Ages is. Good to hear someone higher up on the academic chain of being expressing uncertainty as regards the possibility "getting it right" -- if there's one I've learned in the first two years of grad school it's that just when I think I'm "getting it," I learn something new that throws the entire system out of alignment. Makes the prospect of starting reading for orals a little daunting -- a whole year to rework what I thought I'd learned about the Middle Ages.

Then again, that's kind of why I'm looking forward to it.

Minor detail, but I remember the original ads that ran during football season, and the characters portrayed are very specifically described as "Huns." (Of course, therew may be a school of historical thought that sees Atilla as a great liberator and noble and civilized character -- lord, everything else has someone rehabilitating him -- even Boss Tweed has one major historical defender -- and my interest in history is mostly with the moderns.)

I enjoyed your “some of my best friends are barbarians” tome. I prefer savages myself, noble or otherwise, but the caveman type of Northern European barbarian has that wonderful Wagnerian feel. Perhaps we can start a movement to bring back the horns that Opera singers used to wear in the Ring. Regards, Conan.

In recent ads, they seem to have all—with the exception of Garth—become Vikings, with Norse names like Bjorn, Sven, and Olaf. I liked them better when they were all-purpose barbarians.