The Boy Martyr of Norwich
Far in the thickest wood the fair lad lies
A rosy radiance plays around his head
Tall trees rise black upon the midnight skies
Save where a silver beam reveals the dead.
Magnificat he sang at evensong
And then when music hushed and lamps were low
Alone he homeward went nor dreamed of wrong
And in the still moonlight with footsteps slow
From a dark entry sprang a Jewish horde
Like fiends around the gentle boy they stood
And, as in ages dim they slew his Lord,
Nailed to a cross his white limbs stained with blood.
But God's sweet Mother grants him strength to bear
That fadeless diadem which martyrs wear. 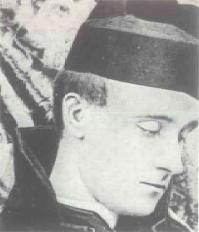 Despite its aural heft, this pious little poem is not some stiff Victorian translation of a medieval text – though in homage to medieval tradition its author composed versions in both clunky English and clunky Latin [the latter features graceful lines like "Ecce puer gracilis silva jacet ille remota." You get the picture]. Both versions of the poem combine the story of William of Norwich, the first supposed boy martyr to Christian-killing Jews, with the nameless "litel clergeon" of "The Prioress's Tale." Indeed, there is a lot more of Chaucer in the poem than there is of Thomas of Monmouth (author of the medieval life of William).

"The Boy Martyr of Norwich" was composed around 1889 by the English writer Frederick Rolfe (1860-1913, AKA Frederick William Serafino Austin Lewis Mary Rolfe, AKA the Baron Corvo). I like the poem because it well reproduces the nebula of languid homoeroticism diffused from late medieval treatments of such dead boys. Its lingering verses couple a fascination with battered youth to an aesthetic overload of red blood and luminous flesh. The Jews are everything little William is not: hurried, shadow-dwelling, nonbelievers, murderously impassioned. Yet there are important differences as well. Thomas of Monmouth clearly adored the dead boy to whose sacred memory he devoted the work of his hands as well as much of his life. At worst Thomas would become extremely irritated when denied the chance to venerate William of Norwich in the flamboyant ways he desired; the result of this pique was usually Thomas imagining that the martyr's spirit descended in glory from heaven to scold, beat, and sometimes kill those who would not allow his tomb candles, a carpet, or a place of high honor in the cathedral. When Thomas looked at William, he saw a way for the city in which he resided to overcome some of its ethnic divisions and imagine istelf unified. When Frederick Rolfe, on the other hand, looked at the boy, he saw -- quite literally -- only himself. Rolfe so loved William of Norwich that he once painted a picture of the boy in which each of the 150 figures had Rolfe's own features, including his raven-like nose. (Rolfe, I should add, was a miserably failed priest who while living in poverty in Italy renamed himself the Baron Corvo, so he probably is not the best authority on making good choices).

The propensity to see in the boy martyr the revered, the holy, and an extension of an idealized self is certainly part of the medieval tradition. Yet there is something disturbing, even a bit Other, about little children in medieval texts. There is a way in which the child, who is "us" and "not us" at once, is a composite formed of recognizable desires and inscrutable demands, a domestic intrusion of the intimate other. Baron Corvo was not true to medieval tradition or to common sense in loving his boy martyr so much, and in granting his dead boy no possibility of challenging that desire, of being as alien as he was beloved.