"hybrid mutant of something" 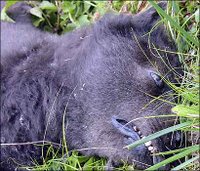 From the Boston Globe, news of a strange animal cadaver that may have been a local monster:

Michelle O'Donnell of Turner spotted the animal near her yard about a week before it was killed. She called it a "hybrid mutant of something."

"It was evil, evil looking. And it had a horrible stench I will never forget," she told the Sun Journal of Lewiston. "We locked eyes for a few seconds and then it took off. I've lived in Maine my whole life and I've never seen anything like it."
For the past 15 years, residents across Androscoggin County have reported seeing and hearing a mysterious animal with chilling monstrous cries and eyes that glow in the night. The animal has been blamed for attacking and killing a Doberman pinscher and a Rottweiler the past couple of years.

People from Litchfield, Sabattus, Greene, Turner, Lewiston and Auburn have come forward to speak of a mystery monster that roams the woods. Nobody knows for sure what it is, and theories have ranged from a hyena or dingo to a fisher or coydog, an offspring of a coyote and a wild dog.

Now, people are asking if the mystery beast and the animal killed over the weekend are one and the same.

File under teratology. Thanks to Marcus Antonius frater meus.
Posted by Jeffrey Cohen at 7:42 AM

PS Is it me or does this thing just look like a Chow dog?

Perhaps he fell behind on his Capital One payment ...

Of course it's a chow--get real.

Moral of the story: a Chow dog / hybrid monster with high credit card debts from Capital One will be shot like any debt plagued chow dog.