Check out The Wild, Uncontrolled Time of the Individual-Becoming, an essay that almost makes wish I suffered insomnia so that I could take chemicals to speed me into similarly compelling associations.

I like the whole essay, but I'll single out the following paragraph, the piece's modern to medieval pivot: 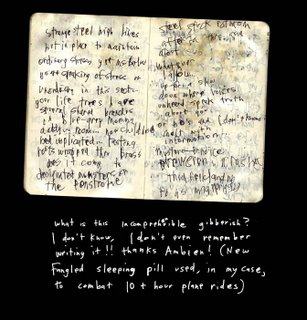 I do not want, for one minute, to make the facile argument that the modern individual is not so very different from the medieval individual (but which modern individual?, and which medieval individual? already over-complicates that notion, and we know better for so many other reasons), or that modernity is really no different, in its social forms, than the Middle Ages (and again: which Middle Ages?), although it can be argued, I believe, that the lines we often want to draw between “premodern” and “modern” are attempts to discern in history something that may not be there—a regular unfolding of “whole” world time in a particular, teleological direction. There has been much work in contemporary science, philosophy, and cultural theory that convincingly demonstrates, in the words of political theorist William Connolly, that “time flows into a future neither fully determined by a discernible past nor fixed by its place in a cycle of eternal return, nor directed by an intrinsic purpose pulling it along” (p. 144). Nevertheless, what I do want to suggest here is that many of the so-called “characteristics of modernity” described by contemporary social theorists rely upon an overly facile understanding of premodern histories (note the emphasis on the plural), while they also call forth, in beautiful detail, a picture of a world I am very familiar with already, not only in my own life, but through the texts of medieval literature. I recently taught a course in Arthurian literature—a body of work with which I must confess I have zero familiarity, knowledge, and training, and from which, with great delight, I have discovered a world brimming over with what I thought was modernity, and even, postmodernity. Although this literature is, indeed, invented and fabulist and only pretends to be historical, it does represent, I think, in many respects, the anxieties and aspirations of the process of becoming modern in the Middle Ages ...

Posted by Jeffrey Cohen at 6:11 PM

Love your take down on this bit EJ:

According to Giddens, in his book Modernity and Self-Identity: Self and Society in the Late Modern Age, in late modernity, time and space become separated, whereas “in premodern settings . . . time and space were connected through the situatedness of place” (p. 16). Further, also in late modernity, there is a general “disembedding” of social institutions, whereby social relations are “lifted out” from local contexts and re-articulated “across indefinite tracts of time-space” (p. 17). Finally, one of the defining conditions of late modernity, obviously intimately related to the two characteristics just described, is globalization, which Giddens describes as being concerned with “the intersection of presence and absence, the interlacing of social events and social relations ‘at a distance’ with local contextualities” (p. 21).

Iirc, JJC's paper on the Green Children that I saw in NYC this year talked about the uncanny subterranean present of the past. JJC remembers this argument better than I do, I hope, but like Balyn le Saveage, it's a perfect way to find late modernity in the medieval (not that I want to pose your project in that way: because I'd be wrong).

Thanks for your comment, Karl; it's much appreciated, as always, especially since I would like to expand this essay into a publishable article. True, I am not trying to make a "medieval in the modern" or "modern in the medieval" argument, exactly. Somehow, we have to get out of the trap of that kind of interlinear thinking [no medieval manuscript glassing pun intended!]. It's more a question, for me, of correcting social theory's misuse of the Middle Ages as a backdrop [or counter] to modernity, while also trying to trace what might, actually, be the real differences between then and now [while also recognizing--guess what?--1,000 years just ain't as long as everyone things it is as regards development of human society].

Per MA as backdrop, here's a bit of bib that I recall as doing something similar from one of my early mentors:

Iirc, it's RKE's takedown of New Hist. for its totalizing perception of the MA, so while it's not the same project as yours, it's sympathetic.

And was it Marc Bloch that said that, at least in terms of agricultural techniques, the Middle Ages didn't end until the late 18th c.? Am I making this up? At any rate, that kind of polychronic (sp?) thinking also strikes me as a useful backdrop for your project.