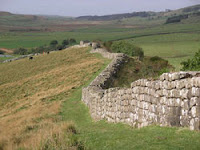 In the latest entry of her blog, A Don's Life, Mary Beard examines the idée reçue that Hadrian's Wall was an attempt to insulate a Roman zone from a barbarian one. She points out that the structure is ineptly designed if it was originally intended to serve only defensively. She then describes the Roman notion of a frontier zone, a place not so much of fearful Us Versus Them as a geography of vivacious intermixture:

Despite the impression given by Hadrian’s Wall (and by a few other places largely in Germany) that they saw a linear divide between the empire and the barbarian world, the Roman image of the frontier was usually much more subtly nuanced. The empire shaded into “foreign” territory across many kilometres that were melting pot of cultural difference and often a hot-spot of trading and commercial activity. It was a question of frontier zones, rather than frontiers – governed partly by Rome, partly by a whole variety of non-Roman powers. Hadrian’s Wall, whatever its function, was an exception.

President Bush and our other wall-crazy political leaders might learn from that.

She's referring to the Bush administration's idea of a security wall demarcating the US from Mexico. Who says late antiquity studies have nothing to say to contemporary immigration policy?
Posted by Jeffrey Cohen at 6:23 AM

I did not mean to imply via my post's title that Prof. Beard was actually sitting atop the wall: squint all you like at the picture provided, you will not glimpse her. So far as I know she composed her own post from the comfort of her study in Cambridge.

In the Middle regrets the confusing wording.

Intriguing thesis, albeit a fairly obvious one for anyone who has been there and has also looked at the evidence for (a) Roman settlements north of the wall and (b) the degree of trade coming from the north. THe Prattian notion of a "contact zone" seems eminently plausible in this regard.

As a sidenote, is a fairly bland critique of US "homeland security" policy all that is really required these days to earn the label "wickedly subversive"?

Oh, I don't think anyone would argue that Beard's post is or was intended to be subversive (wickedly or otherwise). As you point out, Anonymous, it is fairly obvious in the analysis it puts forth. I think it's a function of audience: Beard's blog is sponsored by a newspaper, after all, and attempts to bring accessible connections of the contemporary to the classical for non-specialists. I admire her for being able to do that.

Anonymous: any critique, no matter how bland, coming from classical or medieval studies, in whatever context [newspaper opinion piece or monograph], of the Bush White House represents [for me, anyway] a small triumph of a present-minded premodern scholarship. As to "wildly subversive," I assumed [at first] that you had put that in quotation marks because it was in JJC's original post. It isn't, though. What he *does* imply and state is that Beard's post demonstrates that late antiquity studies might have *something* to say to contemporary immigration policy. That's a rather striking contrast to the idea that JJC was claiming that Beard's post was "wildly subversive." Having said all that, though [in the spirit of asking all discussants here to not "wildly" overstate each other's claims], I would just say, again, that given the general impoverishment in both classical and medieval studies of an active commitment to practicing an historicism that is "mindful" of present political crises when looking at the past, is so endemic as to be depressing, and I believe Beard's nod to "wall-crazy political leaders" is exemplary.

Your post, JJC, is bringing me back to "Mandeville's Travels," and especially its emphasis on commerce--on all the ways in which particular religious and cultural differences can be turned "aside," as it were, when the dominant discourse is centered upon trade [i.e., in Mandeville's account, although the Crusades have failed, and spectacularly so, the East/Muslims can be conquered a different way--through commerce--sounds like Clinton's stance toward China when he was President]. But it's not just about conquering, either, especially in Mandeville's account, which aims for more of an accommodation [to never include the Jews, however--their position is always so abject as to make them unavailable for "commerce" of any kind, cultural, economic, spiritual, etc.--they only serve as an image of continual, apocryphal murderous threat, in Mandeville's account, anyway].

What I'm really trying to say is that capital always has a kind of "mixing/exchanging" and then "flattening" effect--under the sign of money, everyone is the same, up to a point, of course. Differences--the kind that lead to ideologies that allow for enslavement, war, political prisons, laws against miscegenation, genocide, etc.--are typically orchestrated after the fact of the mixing and flattening that economies author in order to exert some kind of political control and the shoring up of power in the hands of the few. I've always assumed that the history of early England would benefit greatly from a better understanding of the context of trade, both along the sea routes and within the islands themselves--this is why I love the archeaologist Richard Hodges' book "The Anglo-Saxon Achievement"--the best antidote, in my mind, to the account Bede and those who have followed in Bede's footsteps have offered to us of England's so-called ethnic make-up--although some archaeologists have told me that Hodges' methods are suspect [don't ask me why, but his book is controversial among archaeologists]. Anyway.

I did not mean to imply via my post's title that Prof. Beard was actually sitting atop the wall

From Wogan-Browne's handout from last week, "Abbesses of Barking across the Continent."

But it's not just about conquering, either, especially in Mandeville's account, which aims for more of an accommodation [to never include the Jews, however--their position is always so abject as to make them unavailable for "commerce" of any kind, cultural, economic, spiritual, etc.--they only serve as an image of continual, apocryphal murderous threat, in Mandeville's account, anyway

But they're still present as the dark side of the commercial imagination, a site of abjection to materialize the fear (knowledge?) that exchange is also pollution.