The raw material of desire

Pundits and cognoscenti can verbiate all they like about why the internet became as popular as it did so swiftly. I happen to know that the reason has simply to do with the strangeness -- yea, the queerness -- of human desires. Among these desires is that to know as much as possible about obscure, weird, and wonderful things.

Thus am I an avid reader of Boing Boing. 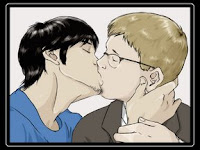 und especially intriguing was on Fantasy Tech Support. It wasn't so much the spotlighted personal ad that piqued my curiosity, but the appended link to slash fiction about the PC and Mac guys from the popular TV spots. To which I say: wow. Our human propensity to drench even the most mundane of materials with ardor has never lost its ability to amaze me.

Being a medievalist, I also had to wonder: is their an analogue to this phenomenon in the Middle Ages? I'm sure there are many, but one that springs quickly to mind is Marie de France's lais. These twelve short narratives are so inventive in their investments of desire (in bodies, in objects, in animals) and so creative in their diagramings of how these desires move (almost always spreading desire far beyond the boundaries of the expected romantic couple), an appropriate subtitle for Marie's lais might be The Big Book of Polymorphous Perversity. I say that in admiration, of course.
Posted by Jeffrey Cohen at 8:20 AM

I have a vague memory of a moment in the Roman d'Eneas in which Lavine's mother accuses Eneas of sodomy. Surely, the Roman is a sort of fanfictional rewriting of the Aeneid, and reads queer desire into the Aeneid through Lavine's mother's accusation. Of course, since Eneas does marry and procreate with Lavine in the end of the Roman d'Eneas, the force of the accusation gets undercut. Perhaps the text intentionally opens the question of Eneas's (Eneas'? Aeneae?) queer lusts in order to entice us to think further about possible perversity between Eneas and Lavine. (Just a guess, here.)

PS. Hello from a long-time lurker!

Thanks, Andrea, for that -- and for de-lurking!

I think there is slash fiction for just about everything. From Bert and Ernie to Minesweeper, and don't forget the Transformer slash.

is their an analogue to this phenomenon in the Middle Ages?

Marriage of Philology and Mercury?

The Courting of Lady Meed?

Of course these are strangely unerotic couplings.