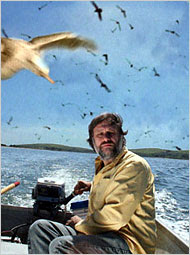 ... as I did in my thoughts on Lee Edelman's No Future, now you can watch Slavoj Zizek propel himself across Bodega Bay and into the movie itself. Yesterday's NYT reports on Zizek's new film, The Pervert's Guide to Cinema.

Oh, and just to restate: Zizek's reading of the birds in that film as the maternal superego is one of his less exciting interpretations, flattening an extraordinarily complex (and baffling) narrative into a psychoanalytic allegory. Edelman's reading, which stresses the inhumanity of the inscrutable avians, is more provocative.

My favorite quote from the article:

“I am too emphatic,” [Zizek] said emphatically. “Too expressive. I don’t think this works on screen. Even if I state something totally obvious, I say it with this intensity, as if I am saying the last truth.”

My super powers are just the opposite: even if I say the most insightful thing with the utmost intensity, it seems totally obvious. Now I know that if I ever touch Zizek he and I will mutually combust, leaving a yawning void where once we stood.
Posted by Jeffrey Cohen at 6:19 AM

Let me add: looking at the picture of Zizek on the boat, the resemblance between him and Tipi Hedren is uncanny.

Zizek is NO Tippi Hedren, and I know you know that! All kidding aside, one of the reasons I knew that Edelman's "No Future" was such a gay man's book were all the still photos of Hedren from "Birds"--she's a perfect gay male icon. It's unfortunate she was such a bad actress.