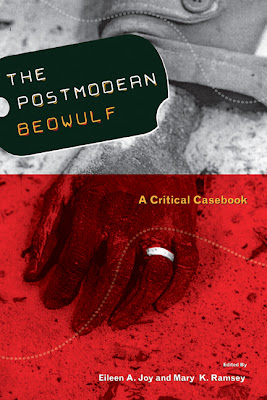 Yesterday I walked into my super deluxe technology up the wazoo classroom, armed with a DVD, a CD, and a memory stick with some kick ass PowerPoint ... only to discover that (1) the thermostat had been ripped from the wall and the temperature was somewhere between spa-like and hellish; and (2) the sophisticated lighting system was broken, so that classroom illumination was stuck at its highest level, irradiating the room with brilliant white. Somehow I was supposed to teach Beowulf Part II in this desert.

So I did what any formerly low tech professor would do. I held my book in my hand and I talked about what the text offered: meditations on history, loss, parents and children, the limits of an identity you never chose, constriction, freedom, oblivion, the unraveling of every human bond, apocalypse, hope. I sweated. I drank copious amounts of water. I considered putting my sunglasses on so that I could see my eighty students better. And you know what? Despite it being so blazingly uncomfortable in the room, it was one of the best classes I've ever had.

No one nodded off. The eighty three of us had an invigorating conversation. We lost ourselves in the question of what we can possibly do that can endure beyond our demise, what actions or objects we can send to a future that seems intent on forgetting everything -- intent on swallowing it into some nameless barrow to rust and rot, or to be guarded by a dragon whose other name is Forgetting. Classes like that -- where both the students and I work up an intellectual sweat -- that's why I teach literature.

I come naked and alone.
Well, I wasn't quite naked in the class, but I was stripped of my technology. That's metaphorically undressed, right? And it did feel vulnerable, to be wondering with my students about survival and remembrance, about questions for which I have no compelling answers.

The line above is from this song, the one piece of media that did function in my classroom yesterday. What did not work, however, was the PowerPoint I had planned, a brief presentation that would have included Tolkien on ruined towers and the transcendent sea; a disintegrating page from the Beowulf manuscript; and the cover of Eileen Joy and Mary K. Ramsey's Postmodern Beowulf. The cover shows a dessicated arm with a ring visible on one finger, a photograph of the corpse of a Kuwaiti soldier from the first Gulf War. I had placed this quotation from "Liquid Beowulf" (the volume's introduction) next to it:

Like the photograph, the poem of Beowulf ‘is a cultural response that, as testimony, overcomes a historical gap, its lostness and its pastness, with a power to reconfigure our understanding of the present world and our present selves.’ And it overcomes that gap, of course, through language, in the same way that the photograph crosses the space that separates the middle Eastern desert from our Western shores.

I wonder what my students would have made of its transtemporal reach.

By the way, I'd also like to put in a good word for The Postmodern Beowulf. I've been reading the thick volume through in its entirety, and though I've pored over many of its collected essays before, to read them back to back and to follow the conversation that Joy and Ramsey have staged has been enlightening. This is a great, fun, erudite book.
Posted by Jeffrey Cohen at 8:52 AM

Jeffrey: you say such nice things about a girl's book sometimes.

I skimmed this and came away with the impression that JJC teaches his classes in the nude. Which entirely confirmed all the prejudices I've always had about the fields of ASNAC and Medievalism. Re-reading more carefully was rather disappointing, I must confess.

Eileen, I love the book, what can I say?

Adam: I'm confused, where did I ever imply that I have even once held forth pedagogically while clothed?