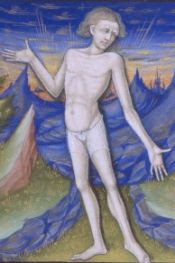 M. Lindsay Kaplan at Georgetown University is working on a big project involving Jews and race in the Middle Ages. I got to know her work quite well when I was asked to evaluate an essay she'd submitted to Shakespeare Quarterly ("Jessica’s Mother: Medieval Constructions of Jewish Race and Gender"-- an innovative and original piece that foregrounds the female body in early modern Jewishness). After presenting her work in progress at GW's Medieval and Early Modern Studies seminar last week, Lindsay sent me the following query via email. I asked if rather than responding to it myself, could I post it to ITM? Because medieval bodies have been my obsession since graduate school, at this point I would without thinking roll out a bludgeoning list of bibliography that perhaps would not well illustrate what's essential and what isn't. I'm genuinely curious: how would ITM's readers answer the following question from Lindsay?

I'm interested in exploring what happens to ideas of the body in the medieval period. Presumably Albert's reintroduction of Aristotle and the overall renewed engagement with classical texts influences contemporary discourses on the body. I've looked at your blog, and while interesting, doesn't turn up a book or books that I should read to get a sense of what's happening ... I like the ideas of the body as not unified but an ever-changing conglomeration of things; this works well with what I understand of humoral theory and how different foods create different humoral tendencies. Also, Will Fisher's work will be interesting here, though focused on the early modern period. Anyway, should I look at ... Peggy McCracken, Joan Cadden -- where should I go for this?

What do you say, everyone? What's your favorite work on the medieval body? What is indispensable? What work still needs to be done?
Posted by Jeffrey Cohen at 11:59 AM

I think some of the most interesting [yet neglected by many scholars] work on the body has been undertaken by medievalists and those working in late antiquity studies [especially in relation to religious thought/experience, sexuality, and monstrosity]. For different reasons, over the past two years, I have compiled quite a few body/embodiment bibliographies, and although I'm sure I'm missing some excellent citations, here is what I recommend:

Frantzen, Allen J. Before the Closet: Same-Sex Love from Beowulf to Angels in America. University of Chicago Press, 1998.

I know I'm omitting a lot, so others should fill in those omissions if they are so inclined. As to what sort of work still needs to be done, let me consider that question tomorrow.

Still pretty swamped, so no time to give this, or Eileen excellent post below, the attention deserved: but I do have recommendations here in addition to everything EJ suggests.

Reynolds, Philip Lyndon, Food and the Body: Some Peculiar Questions in High Medieval Theology. (perfect for "I like the ideas of the body as not unified but an ever-changing conglomeration of things")

No doubt something useful will be turned up here:
Flandrin, Jean-Louis and Massimo Montanari, ed. Food: A Culinary History from Antiquity to the Present. 1996. Trans. ed. Albert Sonnenfeld. trans. Clarissa Botsford, Arthur Goldhammer, Charles Lambert, Frances M. López-Morillas, and Sylvia Stevens. New York: Columbia UP, 1999. (look at food and class for "this works well with what I understand of humoral theory and how different foods create different humoral tendencies")

Work that still needs to be done is a nice big monograph on meat and the (human) body in the MA. Doesn't exist yet. Notably, body studies that I know are all implicitly, and almost without acknowledgment, studies of the human body. This most evident in the by-now classic Rubin and Kay anthology.

Dear Eileen and Karl,
Thanks for your posts -- very helpful. To be more specfic, I'm wondering if there is a new interest in the body in the 12th/13th centuries. I'm finding evidence for the racialization of the Jewish body in this period, and I'm curious to put this in the context of any shift in understandings about the Christian/ "normal" body, both in medical/scientific discourses, and relgious discourses on sin and carnality. I'm hoping for a small reading list here, as I have a lot of reading in other subjects I'm woefully ignorant in.
Thanks!
Lindsay

Was there ever a time when people were not interested in bodies? It's hard to imagine any interest in the body being new ... but having said that, if you wnat to keep your reading list small, your starting point ought to be The Spectral Jew: Conversion and Embodiment in Medieval Europe by Steven F. Kruger. It brings together all those things.

The Kruger's a great resource for this. You might also look at some of the material collected in Mary Stroll, The Jewish Pope: Ideology and Politics in the Papal Schism of 1130. Leiden: Brill, 1987.

From my notes on Stroll, for example,

Arnulf uses racial language, saying that Anaclet's "Jewishness was visible in his face. He then repeats the story of Anaclet's libidinous relationship with his sister, and notes in the most explicit terms how the law of nature was confused by the progeny resulting from their union. Later, again returning to Anaclet's family, Arnulf expressed s was widely believed -- that Anaclet's family had still not been purified from the yeast of Jewish corruption" (161).

We have 'racial' language being used against Anaclet's brother Gratianus who was a hostage and released to Calixtus II during the Council of Rheims in 1119. "The French and others attending the pope noted his dark, but pallid coloring, and said that he looked more like a Jew or a Saracen than a Christian. They observed that he was dressed beautifully, but that his body was deformed, and they expressed their dislike for his father, who, they claimed, had accumulated his riches through usury" (167): from Chibnall, Ecclesiastic History, vol. 6, 266-68

You might be able to link this to some of the doctrine of the persistence v. changing body in the Reynolds, but that might be a correlation/causation error....?

Such a helpful thread! Does anyone have any specific recommendations for the view medieval medicine took on the human body, and whether or not it viewed the male and female bodies differently? Any suggestions would be gratefully received :) thank you!

Hello! This is such a useful threat, but I was also wondering if there are any recommended titles specifically on medieval medicine's view on the body, and wether or not it viewed the female and male body as fundamentally different / essentially the same? Any suggestions would be gratefully appreciated! Thank you :)