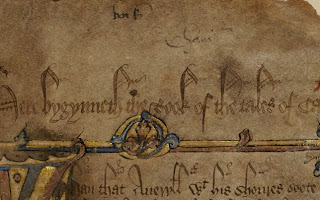 I thank Michael Moon's "Do You Smoke? Or, Is There Life? After Sex?" in After Sex? On Writing since Queer Theory (SAQ Summer 2007) for its reference to David Batchelor's Chromophobia, a work that argues that:

The love of bright hues is an affliction as well as an alleged moral failing that has been routinely ascribed throughout the modern period to “orientals,” sensuous women, children, and “primitives” of “all stripes”...(Moon, 540)

I haven't (yet?) read Chromophobia, but I like what I know about it (e.g., his observations on the privilege of drawing over coloring in), and in my gleanings from here and there, I've been happy to turn up gemlike prejudices from our foundational thinkers. Aristotle called color a "pharmakon" (31), Isaiah 1:18 aligns color with sin and whiteness with purity, and Goethe observed

that savage nations, uneducated people, and children have a great predilection for vivid colours; that animals are excited to rage by certain colours; that people of refinement avoid vivid colours in their dress and the objects that are about them, and seem inclined to banish them altogether from their presence (qtd 112).

I now have that feeling that I contract from some of my favorites works, suspicion coalesced into a master thesis. Call it paranoid desublimation. With Batchelor lodged in my brain, I compare the dangerous passion of the Big Orange Splot to the rational, calm, beige futurity of Swedish design (see the interiors in Scenes from a Marriage, or, if you're an Ikeatiste, just look around).

I also consider the preference for the Hengwrt manuscript over the Ellesmere. At this point, and perhaps at all future points, I've only a hunch, a hunch, moreover, that's not been validated by sprints through (only) three articles (the Linne Mooney Adam Pinkhurst piece in the Jan 2007 Speculum, Michael C. Seymour's “Hypothesis, Hyperbole, and the Hengwrt Manuscript of the Canterbury Tales,” English Studies 68 (1987): 214-19, and Ralph Hanna's "The Hengwrt Manuscript and the Canon of the Canterbury Tales"), a hunch that has been validated, if we can call it that, only by a highly suspicious reading of Peter G. Beidler's characterization of the differences between Hengwrt and Ellesmere ("...the Hengwrt manuscript, the oldest and most authentic" vs. "the lovely Ellesmere manuscript" (29)), by the predilection for the adjective "lavish" when describing Ellesmere, and by ill-remembered, misconstrued, or invented conversations and gestures from conferences, seminars, and, probably, clambakes.

Nevertheless: is it possible that the preference for Hengwrt over Ellesmere, even when expressed with hierophantic jargon of the codicologist, is fundamentally a preference for cool reason over vivid pleasures, pure judgment of the Aesopian body of one manuscript over the all too obvious lavish enticements of another? Are leading questions a valid substitute for research into critical discourse? By all means, no, but if I can't offer my suspicions on a blog, how can I get them out of my head?

Thanks for the image, from here.
Posted by Karl Steel at 2:40 PM

Heh. Further evidence, which also allows you to distribute this dichotomy along nationalist (and vehicular) lines is Stephen Knight, reviewing Blake's Hengwrt edition of the Tales:

"It is certainly easy to see why a British professor is charmed when Hengwrt, that battered Morris Minor among manuscripts, outperforms in its modest reliability the sumptuous Ellesmere, a true Californian Cadillac among medieval sources."

But what changed? Cause we used to love Ellesmere. Perhaps that was when it used to live in England?

Yes, that Knight quote is perfect. That's precisely the sort of thing I would have been able to justify this post with, had I read the Knight and had I remembered it. Thanks for the life-preserver.

Certainly you know this better than I do--didn't the tendency towards the Hengwrt take off with Manly and Rickert? This isn't to say we can't blame things on Los Angeles! It's a fun (Chromophobic at its core?) habit, particularly here on this East Coast.

Yeah, it's true they were interested in it and really made it visible, I think. But it was Blake who really became a champion of Hengwrt, and published that edition in 1980 which boldly left out (not just as missing, but as inauthentic) anything that wasn't in Ellesmere - and of course, that's quite a lot.

But there you go: another interesting example of a split along national lines. Manly-Rickert versus Blake... (Or did Blake not give enough weight to M-R's work? He certainly struck me as a real champion of Hengwrt. I don't know the ins and outs well enough here.)

There was some talk of a visit to see Hengwrt as part of NCS this year. I wonder if it's easier to get access to this ms. than to Ellesmere, which is now pretty much hermetically sealed, isn't it?

But you need no life-preserver. I think you're dead right that we often prefer the serious and labour-intensive over what looks like too much fun. (Check out the next issue of NML!)

Provocative post. These words from Fradenburg came immediately to mind, on the ambivalence we feel about our own scholarly enjoyments and pleasures, because no one wants to fund research that is fun:

we have permitted our explicit attention to the issue of enjoyment to flag somewhat, because of the decisive critiques of formalism launched in recent decades from a variety of historicist and theoretical quarters. It would be wrong simply to resurrect the formalisms of previous decades; but the value now of reclaiming the issue of enjoyment for social and culturalist and historicist projects seems to me to be irresistible. This is in part because, when the humanities seeks to define the social meanings and historical efficacies of its work, we too often elide the issue of our enjoyment by participating in the construction of oppositions between productivity and pleasure which privilege the former term at the expense of the latter--oppositions many of us would be unlikely to tolerate in our work.

It is not surprising that we have, on the level of our institutional discourses, been prone to adopt, however unhappily, rhetorics of need and productivity. There are reasons for such a susceptibility interior to our disciplines: the long history of ambivalence about enjoyment characteristic of Marxist, marxian, and feminist thought, for example, despite the fact that these discourses have also enabled the most sophisticated and moving work on pleasure and desire available to us today. There are also reasons for such a susceptibility exterior to our disciplines, wherein some of the celebrations of productivity we engage in on the level of theory and method converge with the very powerful demand the humanities have faced in recent years that we demonstrate our public utility. ("So That We May Speak of Them": Enjoying the Middle Ages)

That's a long way of saying that in a time when humanities research and scholarship gets dismissed as unnecessary or fluff, is it any wonder that scholars will turn to the ascetic and the unpretty to prove that their work isn't based on enjoyment -- that it is labor, pure and simple?(and here I take it that the gay and polychromatic Ellesmere is visibly more enjoyable to work with than the sparse, dull, workmanlike Hengwrt)

Jeffrey, thanks for the Fradenburg: I'm glad you had that thought at hand, and I'm glad to see that she wrote that (given that at times I think her such a psychoanalytic critic that I would expect her always to turn suspiciously on her pleasure). I remembered that I had quoted some relevant stuff here from my own work (from the written portion of my comprehensive exam!) (also see the conversation about creative writing here): so, right, I wrote:

"If we read Sir Gawain and ignore the Prick of Conscience except, perhaps, as it helps illuminate our favorite poems, we are not scholars: we are dilettantes. It is up to you to find ways to make these texts interesting, but you won’t succeed in this by attending to startling rhymes, unusual vocabulary, or any of these other purely aesthetic criteria. And if you were looking for these things in these texts, I doubt you would be successful. You may think I am arguing that scholarship requires you to suffer, but I would say that if you are bored by these works, the fault is probably yours because you don’t yet know how to read them. Scholarship—-and this is an ethical imperative—-requires that you try to apprehend cultures on their own particular historically, culturally, and materially specific terms and that as you read, as you think, you bring your own assumptions and categories under examination continuously."

I think what saves the c. 2002 me here is the turn back to pleasure, how--if I can gloss my own work--I try to link ethics and pleasure, that in trying to recover why these terribly long, terribly alien works--the Cursor Mundi, Prick of Conscience, the Secretum Secretorum, the Wycliffite Bible(s)--should have been so popular, we might recognize ourselves as having arrived at a goal when we begin to enjoy them, when we affectively, unconsciously, account for their popularity. When we might feel the pleasure--sublimated or not--that drove so many hundreds of households to want their own Prick of Conscience.

Which is to say: it's usual to discover the pleasure in sacrifice, but, less suspiciously, I wouldn't doubt if Blake (and thanks Stephanie for the reminder) somehow liked chucking the Canon Yeoman's tale.

[and, BTW, am I the only one who's heard the story of Manly and Rickert as a story of sublimated, frustrated, peculiar pleasure, sex turned (in)to the war effort and scholarship, uncannily moving on despite death?]

Found another one, also in the Beidler WoB edition: "Many scholars now see even the lovely Ellesmere manuscript, copied by the Hengwrt scribe and arranged by a highly intelligent editor, as a distraction rather than an aid in understanding Chaucer" (91).

I just need about 20-30 more of these, and Chaucer Review here I come!