Let Us Know We are Steeped in Blood: Macbeth and Ourselves as Documents of Barbarism 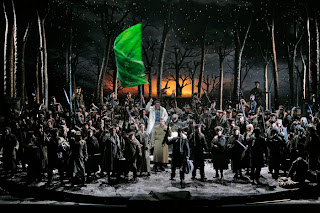 I've seen a fair amount of Macbeth in the last few months. I finally got around to seeing Throne of Blood, I followed this up with the Trevor Nunn Macbeth (with Judi Dench and Ian McKellen), then I saw--this is sounding a bit like an apocalypse, no?--the Verdi Macbeth at the Metropolitan Opera (see the photo to the left), and, just yesterday, I saw an excellent and scary * Macbeth at BAM with Patrick Stewart (who's surprisingly spry and quick for someone who's very nearly 70 years old).

Barring the Kurosawa, all my recent Macbeths occur in a militarized Europe c. 1925-1955. While none is quite so strenuously and particularly set in this milieu as the 1995 Richard III film, while the Nunn is set so minimally that I'd hesitate to identify it as anything but Macbeth, and while the Metropolitan Opera has certain features from the Balkans of the 90s, all nonetheless have in common men with slick-backed hair, jackboots, khaki, and, depending on the production, jodhpurs, assault rifles and pistols, camouflage, and, for the women, evening gowns cut from the 30s.

With all the power at my disposal, which is to say: none, I declare this particular setting a cliché and thus call for a moratorium. Set your Macbeths elsewhere please. Let them be set in Abu Ghraib, perhaps, with Macbeth or better yet the weird sisters played by German Shepherds; let them be set in a hamburger stand in Pennsylvania; let them be set in academia, on the steppes, in the hallways of KBR or Blackwater, at Balad AFB, but please avoid setting them in postcolonial sub-Saharan Africa.

It's why this cliché is a cliché that demands it be verboten. The setting's an easy out; it's the theatrical equivalent of a Godwin's Law violation; it appeals to our sense of self-satisfaction and relief at not being fascists, totalitarians, or victims and/or apparatchiks of such regimes. I might call this setting the opposite of Brecht's alienation device: it's a satisfaction device. We recognize Macbeth's horror elsewhere, not in or with ourselves; through this, we attain the self-satisfaction of the original English audiences, pleased to see the rough Scots finally transformed from Thanes into Earls ("My thanes and kinsmen, / Henceforce be earls, the first that ever Scotland / In such an honor nam'd" V.ix.28-30). If not Democracy, then benevolence has come, with the repulsive, oleaginous Malcolm as the voice of our better conscience. How, then, to accuse us of the horror? How to brush ourselves against the grain with Macbeth?

* Excellent and scary except for the embarrassing industrial-techno-chant of the witches cauldron speech, which sounded like muddled, low-grade Test Dept. or Laibach.
Posted by Karl Steel at 12:49 PM

I also saw the Scottish play a couple times in Cambridge -- the first at the ADC theater, where the militarism was played up a LOT, but such that the moral was not "Thank goodness those rowdy primitive thanes have civilized into earls," but "The 'civilization' that the English bring is no improvement at all, and if anything things are getting worse." Not sure that's an improvement, though -- still makes the play about the inevitable binaries of the postcolonial situation, just switches a value sign next to the English.

The second I saw was an outdoor performance in one of the gardens of the Cambridge colleges -- people oozing around the side of this huge tree with low-hanging branches, stepping in and out of shadow, and the whole play getting darker and Macbeth getting more and more manic and sinister as night fell in the garden. Best production I've ever seen. And, they staged the dripping, bloody head at the end -- WHY do productions cut this out?!? In short -- there is hope for the play yet.

I say we give Macbeth a break, and bring back J.W.'s The Valiant Scot (1637) (thought to be by John Webster, though when canons were being assigned no one wanted to admit this play might have been by the genius Webster, so we stick with J.W. to be safe), which tells the story of Braveheart in this deliciously strange Elizabethan fashion. Highly recommend it. Please notify Patrick Stewart.

(1) I could kill you for getting tickets to that Macbeth performance -- how did you manage it?

(2) What I'd really like to see is a Macbeth not propelled into the future via vaguely contemporary militarism (you are so right to ban that cliché, and I like the reasoning you provide for doing so, the disidentification it performs) -- but a Macbeth of the "distant" past, one that travels backwards in time rather than argues for contemporary relevance. The neolithic Macbeth: that's what 'm talking about. Seriously.

Liza, your Oberon experience sounds similar to a high-tech, repugnant Off Broadway Bacchae I saw in 2000 or 2001. Its materialization of Pentheus's fantasies suggested that the director could also have been well served by being maternally torn apart.

Hurrah for your oozy outdoor Cambridge production, but then again, I'm a sucker for outdoor Shakespeare (e.g., saw a fun Love's Labour's Lost in Central Park last summer). The BAM Macbeth DID have the bloodied head at the end, thank goodness.

And thanks for the JW suggestion: Sounds delightful! I'll add it to the list.

JJC: They were a holiday present, so you'll have to ask ALK. I think it has something to do with being BAM members.

One could also do simultaneously neolithic/futuristic Macbeth to prevent any (dis)identification. Nostalgia and hope for the future would both be frustrated in an eternally dystopic Macbeth, and the audience would cling to the play itself as the only place to rest their shifting identifications.

I saw something similar to what you long for at the Ashland Shakespeare festival in 1991 or 92: an Etruscan Julius Caesar. The assassination was done as a kind of human sacrifice: lovely, jarring stuff.

Jacob, my younger son, is in eighth grade and just had his first encounter with Shakespeare and the Scottish play. He learned about the story, the curse attached to naming the unnameable, and that Middleton may have helped with the Bard's writing. I was really taken that an eighth grader could learn such things - things I didn't find out until I was in grad school.

It may just be my 'renaissance envy', but I like the idea of taking the entire Shakespearean edifice down a notch or two. He was, shall we say, the Neil Simon of his day?

He was, shall we say, the Neil Simon of his day?

When I was a smart-ass high school kid in the mid-to-late '80s declaring my disdain for the cliche of Shakespeare in toto, that's *exactly* what I used to say!

Did any of you see those BBC adaptations of Shakespeare, along the lines of the Chaucer ones they did -- you know, where they use the story but not the language? Anyway, James McAvoy played a culinary version of Macbeth, struggling to make a go at his own restaurant finally -- allowing for the "is this a dagger" scene quite nicely, and also making realistic room for military like authority and hierarchy (and shocking betrayal) that nevertheless played in fresh ways. (Escoffier, the French chef who first regularized the professional kitchen, modelled it on the French military.) It also provided the opportunity for Macbeth to loving stroke a pig's head, showing his staff how to honor the animal that was about to become their food -- don't know what that has to do with Macbeth so much, but you would've dug it, Karl.

Of course, it's a Shakespeare post that brings me out of hiding...

Dr. V--I managed to see the Macbeth episode of the ShakespeaRetold (TM) series. (I missed all the others, though.) I thought the language sometimes veered off into the silly--every time I see James McAvoy now, I have the urge to yell "Pigs are landing on my head!"--but the setting really worked.

Actually, I just finished watching the second season of the TV show Slings & Arrows, which was all about "Mackers," and it felt a lot like what's described in this post--"hurray, another modern military Macbeth." It's as though it's asking too much of the audience to engage with the play (or any play) unless a convenient contemporary analogue is provided.

I saw "Hamlet" in Minneapolis two years ago set in the same period. It was well done (Fortinbras storms in at the end in military uniform to the sound of bombs falling), but I see the setting is getting overused. I suppose it's convenient.

The Metropolitan Opera has certain features from the Balkans of the 90s, all nonetheless have in common men with slick-backed hair, jackboots, khaki, and, depending on the production, jodhpurs, assault rifles and pistols, camouflage, and, for the women, evening gowns cut from the 30s. Great stuff!