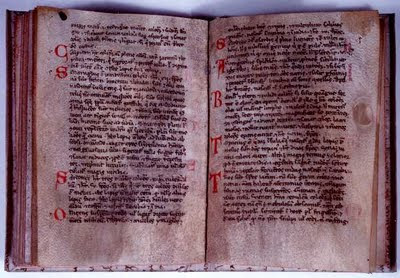 [illustration: Marbode of Rennes (1035-1123), De lapidibus. This is a thirteenth century ms in the Countway Library at Harvard. Marbode was the principal gateway through which stone lore passed into the Middle Ages]

A contextualizing word about what I am attempting with this piece on stones.

I chose stone -- or stone chose me -- because rocks seem as inhuman a substance as can be found. Given the theme of the inaugural issue of postmedieval, why not explore the inter-relation of human and stone? Unlike in previous work, though, where I foregrounded the aesthetic impulse in the geologic, or the communicative potentialities of the lithic, or the phenomenology of stone architectures, here I want to get at the ways in which stone's movements might constitute an agency or even a desire that might challenge an anthropocentric vision of temporality and history ... that might invite meditation on what it means to be human, to inhabit a world that is potentially indifferent to humanity and yet intimately continuous with it at the same time.

By foregrounding mineralogical motility, I am trying to be both scientific (from a geological perspective all stone moves and changes; given a large enough temporal frame, any component of the universe acts as if an errant atom, any solid or sedentary combination proving ephemeral) and medieval.

Parts of the Large Project have appeared here at ITM and in print with names like "The Weight of the Past" and "Medieval Prehistory." The bigger investigation concerns not just stony architectures like Avebury, not just the possibility of human communication across vast temporal spans enabled by rock, but the substantiality of stone itself, its thingness, materiality, factuality. I have therefore been doing quite a bit of reading about how stone figures in medieval travel narratives, as well as in how stone's virtues and agency are envisioned in medieval geological treatises, the lapidaries. Stone in both genres never remains still.

Lapidaries stress the radiative virtue of gems. Vermidor, for example, holds such intensity that it glows at night like an inextinguishable candle. When placed against a bodily swelling, the ailment subsides immediately. Stones in these treatises are seldom found in some purely natural state. They are always being extracted from the bodies of exotic fish, or from the beaks of Indian birds oblivious to their powers. Stones, that is, are embedded within networks of agency in which what they can and cannot do -- where they may and may not move, what they desire and what they can achieve -- is simultaneously constrained and enabled by other actors within that network: humans, rivers, angels, animals, intensities of heat or light. No single component of the network is really detachable as a lonely actor. The whole meshwork pulses with movement because of the reaction chains that it enables, augments, and is often transformed by (autocatalysis without end, leading in unpredetermined directions).

Sorige, for example, is a green stone found within a river traversing the terrestrial paradise. Sometimes the currents of the stream convey sorige into la grant Ynde, conveying the gem from Eden to more mundane waterways, where it washes into the mountains. Fish-eating beasts as large as dogs place the stones in their mouths, unaware of its powers. Sorige can be extracted only when a naked virgin is placed close enough for these creatures to smell. A beast will approach the girl, place its head between her breasts, and fall asleep, intoxicated by the sweet scent of virginity. The beast can then be easily killed by a man waiting nearby, the stones extracted from its mouth. As long as the bearer is Christian, sorige will cure gout, destroy vermin, prevent stomach aches, and ward against rabid animals. The gem's powers will cease immediately if worn by someone dishonest or dirty.

No medieval stone exists alone, but is an agent in a narrative that exceeds any use value, any practicality, a gem of aesthetic efflorescence that conveys conventional histories and received traditions beyond any border that they would ordininarily cross. Lapidaries were a major gateway for pagan learning back into orthodox Christianity. They carried into the medieval future the challenges and spurs to the imagination of its superseded past. Lapidary lore could spur a reconceptualization of present and future in terms rather different from idées reçues. Sometimes this reconfigured reality bordered upon what we would today call the posthuman.

Few objects are as heterodox, vagrant, or powerful as medieval stones ... or maybe as all things lapidary, even today.
Posted by Jeffrey Cohen at 8:04 AM

Agreed. I've been waiting for something good to read about lapidaries. I think I've found it.

Just three days ago I was wandering through a huge network of caves - an entire underground natural city - in the Pyrenees which have been inhabited by humans and others for millennia. A few days before that is was the cliff caves in which people still live in Rioja.)

Anyway my daughter said something both poetic and profound about the impact of cave dwelling on humans, which I wish I could recall, but too much driving and too little sleep (now in La Rochelle and heading home too fast) have erased the details from my memory. It was enough that she said it.

This is splendid, Jeffrey. You've probably heard of her, but in case not: Juana de la Cruz (late fifteenth-early sixteenth c. Franciscan) believed souls suffering in purgatory were trapped inside the stones she used to warm her body? Animate, indeed. cheers, h

Thanks so much for that reference, Holly. I haven't looked at the Sor Juana materials since I was in graduate school: you've given me a good reason to return. Sarah, let me know if you remember the gnostic utterance of your daughter!

Anna, Rob: thanks for the vote of confidence.