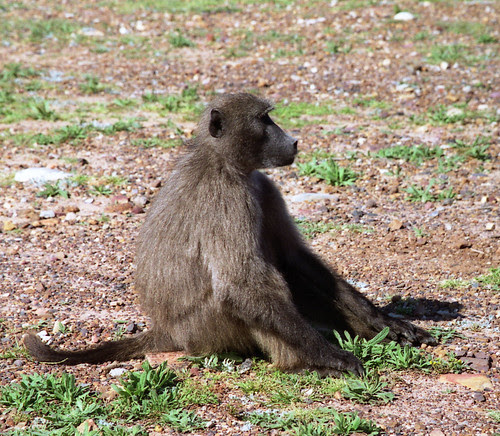 Take 10 minutes and listen to Barbara Smuts talk about becoming a shy baboon. She becomes baboon by sitting like one (see picture above); she corrects her interviewer's boarish imitation of a baboon by properly snorting, lip-smacking, and snuffling, briefly confusing those of us who had tuned in to hear only Barbara Smuts, human; as she tells it, although a vegetarian, she salivates when she looks on as the baboon troop dismembers a young gazelle; and when she takes shelter from a storm in a fisherman's hut and discovers it thronged with baboons, she remains with them.
When Robert Krulwich asks her if she thought she was stealing something, she replies:

we are so used to this dividing line. There's humans on one side, and then there's all the other animals on the other side, and we don't meet up. But if you go back in evolutionary time, that line wasn't there. So, rather than feeling like I was stealing something, it felt like I was retrieving something that was my heritage. It felt so completely natural to just be with them, to not be doing anything, to just be.

You should be able to identify where I would apply pressure--back in time, completely natural, just--as if the vegetarian scholar Smuts is less natural than the baboons, as if the "heritage" (which includes a heritage of dismembering others) is not all around us, all of us, now, depending on how we allow ourselves to sit, depending on how we allow ourselves to be sat with. But I don't want to grouse much. Have a listen, get hooked on Radiolab, and let me know in comments, if you like, what you think I should listen to.

(image via flickr user Exfordy, through a Creative Commons Attribution 2.0 Generic (CC BY 2.0) licence).
Posted by Karl Steel at 9:51 AM

thanks, Karl! I'm writing about early modern "baboonizing" and this is such fun inspiration.

Most interesting - thanks Karl. I learned much more from your comments than from the story. From the story (and the comments on the Radiolab blog), I learned a few unsurprising things: (i) baboons will tolerate a fellow primate in their midst (ii) some scientists and other people are eager to prove kinship with animals (iii) (from the comments) the idea that the dividing line between human and non-human animals is permeable makes people breathless.

I agree with you about the pretty quiet assumption that the researcher is "unnatural" and is attempting to enter a "natural" environment - that bears much interrogation. As for the "heritage," I think this is where it gets really interesting. I would love to hear more from Smuts about what she means by this concept. It's one that's often invoked in defense of meat-eating by humans, despite the great differences between feral predator behavior and industrialized human food production. I'd love to hear more, especially how her vegetarianism and her (what she perceived as) close and intimate contact with the baboons might inflect one another.

Fun quiz: which of the following do you think might be the best analogy to express the baboons' attitude to Barbara Smuts?

1. We had this really weird lodger for two years. He didn't speak a word of English, but he'd sit with us in the evenings. He didn't say much, but he'd occasionally try repeating what we said. He never ate a thing that we ate; he always went out to eat.

2. There's this weird guy who I often see hanging around on my street. He sometimes wanders into our yard when we're sitting around. I wanted to tell him to leave, but my wife is a nicer person than I am and said he's not doing anyone any harm. But he gives me the creeps. He's probably harmless enough, but there's no way I'm getting within about three feet of him.

3. My sister has an Irish setter. I'd heard they were really dumb dogs, but sometimes, when I look into his eyes, I feel a real connection to him. My brother has a border collie though; now *there's* a dog I can relate to.

HD: you're welcome! Hoping to be able to see/hear what you come up with.

'Stantoro': I think your reading of 'heritage' is probably more interesting than Smuts: my guess is that she meant the relatively close ancestry of humans and baboons, with the (common) implication that primate behavior is the past of human behavior. Thinking here of an article I don't remember well, Marlene Zuk's "Bonobos: Dolphins of the New Millennium."

As for your quiz: good stuff! I don't want to answer out of respect for the quiz as a whole. I like to think it's #3 though.