Dispatch from the Lost Weekend of a Long Hiatus: Why Art Matters (Again and Again) 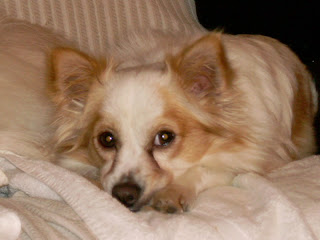 The past month feels like a blur. A lot of things happened that were not so pleasant, some things happened that were fun, but none worth reporting. Time marched on and was measured by a variety of watches and wall clocks and cell phones. It got really, really cold. Pants still had to be put on one leg at a time, and absolutely nothing was accomplished on an intellectual or "academic" level. Blog posts not only weren't written, they couldn't even be conceptualized. Weight was gained and scruples continued to be shed in the wild hope that something interesting would result [but did not]. A new dog was adopted [see Figure 1], and requisite chew toys were acquired: this is what we call "news" around here, and it is "small" [literally]. The new semester has begun and I'm climbing a little set of stairs back to normalcy, and I thought I'd post here just a random "dispatch" culled from a brain that resolutely refuses to make any New Year's resolutions, other than to keep moving forward while reaching backwards into some of our weblog past.

I finally [and belatedly] read Dan Kline's post, "Pitched Past the Pitch of Grief," which I front-page here again just in case anyone missed it. It is a beautifully written and moving meditation on the recent violent death of one of the students recently enrolled in Dan's graduate course on Genesis 22:1-19, and my understanding is that there will be more installments on this soon. It is one of those pieces to which the appropriate response is probably a respectful silence, although it did get me thinking a LOT about a subject I have obsessed over in the past: how to interpret Abraham's willingness to sacrifice his son, Isaac, especially in relation to, as Dan outlines, the traditional Jewish and Christian and other theological and scholarly responses--where, alternately, the story is seen as God's way of getting humans to replace human sacrifice with animal sacrifice, or as a prefiguration of Jesus's more "perfect" sacrifice [also a son sacrificed by a "father"], or as an example of perfect obedience to God, which is especially figured in Abraham's response to God's call, "Here I am," as opposed to, "what can I do for you?" [or some variation thereof]. The "here I am," of course, indicates a willingness to do whatever God wants, even before he poses the question, or command.

My favorite extended response to this story in Genesis, as I've actually mentioned in this blog before, is the film The Believer, about Daniel Balint [really: Daniel Burros], a Jew who became a neo-fascist [in reality: a clan leader of the KKK] and ultimately committed suicide when his Jewish identity was unmasked by a New York Times reporter. The rage that Daniel felt as a child in his yeshiva classes about the Abraham and Isaac story [which later is attached to his rage against Jews for, in his opinion, having been too passive in the face of their own holocaust during WWII] becomes the central motif of the film and the way it returns at the end, after Daniel has died and something like his ghost has returned to the school where he continues to argue with his teacher, is brilliant and also illustrates the ways in which, I really believe, the "teaching" and "interpretation" of this story always has to take on some of its monstrousness, which can never be fully shaken off. To believe in this story--to believe, more pointedly, that it has a valuable spiritual lesson to relay contained within its layers and layers--is to take within oneself a piece of monstrosity, of cruelty. God is a monster, as is Abraham, and as Dan K. beautifully points out, what are we to make of how Isaac is supposed to live [and *sit*] with all of this afterwards, regardless of all the positive spin theologians might put on it? I cannot believe in a God who would demand such a thing, nor who would--according to the theology that says "everything happens the way it does because God wills it that way"--enact the senseless and useless murder of Dan's student.

As regards, Dan's attempts to help his students come to grips with Levinas's very difficult ideas about the uselessness of suffering and the ethical necessity to not turn someone else's suffering into your own [to make it a "thing" for your own purposes], how are we to consider the proper way to suffer, or to take on, in the correct way, the suffering of Dan's student who, by virtue of the way in which he died [suddenly and without warning] did not, technically speaking, suffer in a long prolonged fashion. If anything, he had violently taken from him the opportunity to, let's say, suffer his own mortality, his own death, but this also raises the question of whether or not anyone ever has that opportunity. As Levinas himself puts it,

". . . death is the hole which undoes the system, the disturbance of every order, the dismantling of every totality. You go toward death, you 'learn to die,' you 'prepare' yourself for the final event; but in the last quarter of an hour--or the last second--death is there, travelling its part of the route alone and ready to surprise. . . . To be unassumable belongs to death's very quality. It is an event without a project insofar as the 'project' that one might have of death is undone in the last moment. It is death alone which travels the last part of the route. Not us. One does not, properly speaking, encounter it." [Is It Righteous to Be? Interviews with Emmanuel Levinas, p. 122]

But Levinas continues to say that the "mystery of death" also offers an opportunity, a very human one, for those of us, like Dan, who "attend to the death of the other." Levinas writes further,

"We shall never know what death signifies for the deceased himself. We do not even know what legitimacy there might be in saying, 'for the deceased himself.' But for the survivor, there is in the other's death both the disappearance of the deceased and the extreme solitude that results. I think that the human consists precisely in opening itself to the death of the other, in being preoccupied with his death . . . . [A]round the death of my neighbor is manifested what I call the humanity of man." [Is it Righteous to Be? pp. 123-24]

Is this not exactly the task Dan has set for himself in the meditations he has so lovingly crafted that intercut and bring into "touch" with each other the ideas of useless suffering, of sacrifice, of death, and of his student as a person? Therefore, through Dan's writing, the death of his student is both inscribed [it is recorded, made note of, witnessed] and also, as Levinas would say, it becomes "impossible." This is the power of a certain attention, or regard, of each person in his or her uniqueness, worked through writing, through art--the only medium capable of giving to a random chain of events, or even ideas, the weight of meaning, of sense. In his excellent essay [in seven parts], The Curtain, which is a kind of defense of the novel, Milan Kundera remarks on the ways in which the novel [and by extension, all narrative literature] rejects the time of clocks in favor of "an extreme density of action," and the resulting accumulation of events fills us with wonder at the "particular beauty" of "a sudden density of life." And only the novel, finally, can "reveal the immense, mysterious power of the pointless." Dan's writing here, I really believe, does both, and I thank him for these labors.
Posted by Eileen Joy at 1:37 PM

Many thanks, Ellen, for your sensitive commentary. It is right in tune with my own process over the last couple of weeks in trying to make sense--or at least finding a resting place--in the midst of the turmoil Jason's death has unleashed in and for me. The Believer is indeed one of the most powerful contemporary mediations on the akedah that I've seen, and your Levinas citations are very helpful. I want to extend here my thanks for others who've contacted me personally--off-blog, if that's even a term (yet!)--with kind and supportive comments thus far.