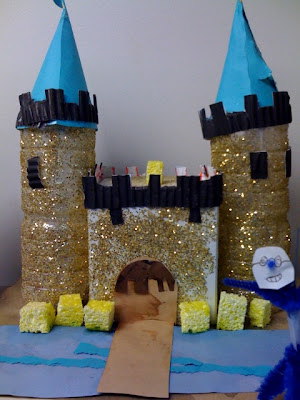 In the comments to this post on medieval robots, I offered to put up a photo of the castle built by my son six years ago, when he attended a "King Arthur's Court" summer camp.

The castle has been sitting in my office for years. I never grow tired of looking at it.

If you are wondering what the odd visage atop a blue body in the foreground, that's a Groovy Guy (tm). My son invented them as one of his get rich quick schemes. The Groovy Guys (tm) are made from pipe cleaners and paper. They come in assorted colors, and were released in limited series (the one in the picture is a super rare "Groovy Guy [tm] blue Series 1: Ned"). Each folds into its own collector's envelope, or can be displayed upon a desk. They were sold in the small storefront he erected in my office during the summer of 2006 for $2 each. His notion was that they would become a mania, like Pokemon cards or UglyDolls. They didn't.
Posted by Jeffrey Cohen at 11:50 AM