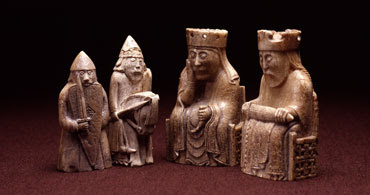 A thoughtful piece by Ian Jack appeared in the Guardian, examining the cultural brouhaha that has erupted over Alex Salmond's declaration that the Lewis Chessmen should be removed from the British Museum and repatriated to Scotland. Salmond made the statement in a speech about preserving Gaelic language, and implied that the game pieces are historically central to Scottish identity: "I find it utterly unacceptable that the Lewis Chessmen are scattered around Britain in a bizarre parody of the Barnett formula. And you can be assured that I will continue campaigning for a united set of Lewis Chessmen in an independent Scotland."

As Jack points out, the chessmen are not exactly scattered: the British Museum possesses 82, the National Museum of Scotland 11. It is difficult to fold these little guys into an easy narrative about enduring national identities. Chess originates in India and became a truly international game in the Middle Ages. These walrus bone pieces beautifully intermix the Christian and the secular, the transnational and the regional. The figures may have been carved in Norway in the twelfth century, and perhaps were headed for a princely purchaser in Ireland or the Isle of Man when they were buried in the Outer Hebrides, an archipelago that served as a medieval mixing bowl of peoples, bridging numerous lands. To enshrine the figures as emblems of Scottish identity is to request that they stay put in a way that their history resists. Can there be repatriation without an originary patria?
Posted by Jeffrey Cohen at 7:47 AM

Weren't the Outer Hebrides Norwegian when the chess pieces were buried?

Send them to Iceland, or some other formerly Norwegian territory!

Is there some reason why things need to be repatriated anyway? Is it not wonderful that people all over the world, should have the opportunity to see objects of art, culture, etc, that come from all over the world? How boring and limiting if all I could ever see around me was stuff that came from right here. How invisible a culture or location would be if material traces of it weren't present for viewing and study in distant places. Sorry but that's the way I have always felt about it. I am aware that there are other perspectives.

Nice post Jeffrey. Last night, I idly opened Alison's copy of Byatt's The Virgin in the Garden, where I ran across the following apposite bit in its second paragraph:

"He considered these words, once powerful, at present defunct, national and portrait. they were both to with identity: the identity of a culture (place, language and history), the identity of an individual human being as an object of mimetic representation."

I love that: "at present defunct." I wish I'd written that.

As for sending them to some formerly Norwegian territory, hell, I think it'd be much more in line with the Norwegian heritage to send them a-viking: let them sack Paris, found Dublin, knock over Whitby.

...on a more serious note, I suppose I should track down Spivak's bit on strategic essentialism...

Though if this is "strategic essentialism" it's a non-Spivakian version. More likely it's opportunism devoid of a deeper reflection of the long temporal and geographical chain behind the objects. Spivak is all about political effectiveness in the face of the complexities of identity; this call for repatriation seems to me about a reductionism without a clear or useful objective other than the fostering of a misplaced national pride.

On a related topic (islands off the Scottish coast and their relevance to national identities), one of the most useful-to-think-with medieval texts that I taught in my graduate seminar on "Writing Race and Nation" a few years ago was the Orkneyinga Saga. With its tensions between local and national identities and its vivid illustration of world in which peoples and cultures are always on the move, it was a good antidote to the idee fixe that medieval peoples embraced only homogeneous and non-hybrid identities.

Oops: they were both to DO with identity

Orkneyinga Saga
I'll add it to the list. From Orkneys I presume?

I'll have to give your (nicely crafted) precis of the Spivak more thought--and, again, (re?)read the bits where she talks about it--since certain words, "opportunism," "national pride" vs. "political effectiveness," seem to invite an annoyingly automatic deconstruction.