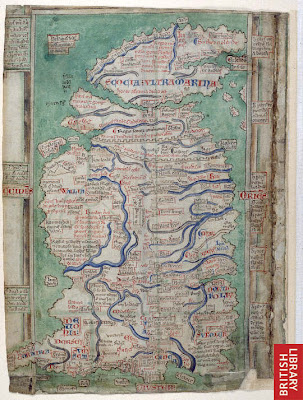 This semester I'm teaching a new course called "Myths of Britain," a slow read of six works that are animated by the transnationalism of the Middle Ages. The class is the largest I've ever had: eighty students, most of them freshmen and sophomores. Contrast this behemoth with my course for the past two semesters: "Chaucer," filled with twenty-five theory-savvy senior English majors. Although I always have butterflies before the first meeting of my classes, this time around it was more like cicadas -- or whatever other non-aesthetically pleasing insect comes to mind.

Mainly I was worried about how to speak to eighty people at once without mere lecturing. What's the use of offering a live version of a video recording? If no opportunity for conversation exists, if no space opens for a dialog that can alter our destination (or at least bring us to some unexpected stations along the way), the course is not a literature class.

The technology I hoped to utilize also caused me some anxiety. Although in the past I've been the recipient of all kinds of funds for bringing electronic media into the literature classroom, in the past five years I've become relatively low tech: me, a book, some handouts, real-time and embodied discussion. Typically my classes unfold in the shabby spaces that populate our campus, rooms that make our students wonder why our tuition is so high and where all the money goes. "Myths of Britain" answers that second question. Because the theater-style classroom I've been assigned belongs to GW's school of international affairs, it has technology up the wazoo: a document projector, a computer, a DVD player, a touchscreen master control, microphones, two descending screens, twin LCD projectors, lights that dim at various percentages of brightness, microphones, podcast enabling software ... a colleague predicted that I'd be acting out the Disney version of the "The Sorcerer's Apprentice," with screens rising and falling, lights flashing, special effects booming. Fortunately I did not play the "Mickey Mouse in a pointy hat" part after all -- mainly because obsessive moi went into the classroom twice last week and practiced using the machines.

So, on the first day of class I opened with the closing scene of Lerner and Loewe's Camelot, the hammy song where Richard Harris tells young Tom of Warwick that he must in future narratives memorialize the "one brief shining moment" that was England [!] at its best. We talked about how the film cites T. H. White citing Malory; how JFK may or may not have cited the film (and the publicity machine that aligned the dead president and the film's bittersweet ending); and how Monty Python then turned citing the musical into an industry. I think by the end they were fairly convinced of the life of the past, its utility to the present, and its destiny as forger of desired futures.

After going over the syllabus, we had a brief PowerPoint collage of maps, a reverse history of Britain, from the (dis)United Kingdom to neolithic migration. Despite these potentially distancing technologies, most of the class was actually just me and a poem, 'The Wanderer." I pretended that there weren't eighty students in front of me, just my usual twenty-five, and I spoke with them as I would to smaller group. Remarkably, they answered back. The acoustics of the room are good, we had an intriguing discussion about apocalypse, living in a time that would like to imagine itself as new, the relegation of living peoples to a distant history... and so we are off to a good start. It helps as well that I have two superb graduate students who will be leading the smaller discussion sections once a week.

Below, for anyone who is interested, is my syllabus. The course is for non-majors, is introductory level, and is writing intensive. Updates as the semester unwinds.

Much great English literature turns out not to be so English after all: the action of the epic Beowulf unfolds in Scandinavia; King Arthur was a Welsh king before he was an English one; Shakespeare's Tempest takes place on an island in the Mediterranean, but the play is also about the colonization of the New World. "Myths of Britain" looks at early English literature within a transnational frame. Students will enjoy literary works like Seamus Heaney's version of Beowulf; the Arthurian poem Sir Gawain and the Green Knight; Geoffrey of Monmouth's medieval Molotov cocktail of a text, the History of the Kings of Britain; and Shakespeare's last play, The Tempest. We will also read some lesser-known texts that beautifully stress the turbulent multiculturalism of medieval England: Marie de France’s lais, elegant narratives of transformation and desire; and Mandeville’s Travels, a journey through a world populated with strangely familiar monsters and marvels.

Our objectives are threefold:
(1) to give you the chance to hone your writing through the careful analysis of a rich body of literature within its historical context
(2) to introduce you to cutting edge approaches to the study of early England within a transnational frame
(3) to explore the relation between narrating the past and bringing about a desired future, paying close attention to who and what must be excluded from this emergent community

Course format: The course meets twice a week, on Mondays at 11:15 a.m. in 1957 E Street B12 for lecture, and on Wednesdays for discussion sections. Attendance at both lecture and discussion is mandatory.

Requirements:
1. Attend lectures and sections; participate in discussions; complete readings on time.
2. Reading quizzes: Monday lecture sessions will begin with a brief reading quiz. Lateness or absence from lecture is not an excuse for missing the quiz, and quizzes cannot be made up. The quizzes cumulatively take the place of a midterm and final exam.
3. Writing assignments: There are five short but intense writing assignments, culminating in a final paper that will be revised once. Detailed information about the assignments will be available in advance, and you will have opportunities to discuss the assignments in section.

Policy on lateness and extensions: Except for a documented medical reason, late work will not be graded. You may not take an incomplete for this course.

Disability statement: If you feel you need accommodations based on the impact of a disability, contact Prof. Cohen and your TA. Disability Support Services (Marvin Center 242, 994 8250, http://gwired.gwu.edu/dss) is available to assist you.

Grading rubric:
Participation and attendance at section 10%
Reading quizzes 15%
Five short but intense writing exercises 10% each, for a total of 50%
Final paper (including revision) 25%

Code of Courtesy
Arrive on time with your cell phone silenced. Bring the appropriate book to class. Give the professor and your TA your full attention. Remain in the room until the class ends. Never hesitate to ask a question or to request clarification.

Schedule of Readings and Assignments

Looks great, and I'm glad you're bring in the Cesaire. I presume you're not doing all the grading? And are you going to use the technology as intensely every class period?

On SGGK, have you read this newish article, Lynn Arner's "The Ends of Enchantment: Colonialism and Sir Gawain and the Green Knight" Texas Studies in Literature and Language 48.2 (2006) 79-101?

Though the syllabus speaks only of the undergraduate objectives of the course, it has another: to provide graduate students early in the career with a deeply (but we hope not oppressively) mentored teaching experience. After each Monday meeting of the full class, the two GTAs and I meet to discuss the objectives of the Wednesday section meetings. We'll talk about the texts and how to frame them; ways of provoking conversation about key points; and how to incorporate other exercises (e.g. Free Writes). This will also be the time to discuss as a threesome any problems arising, and any rejigging that needs to be done to the course. I will sit in on each section several times with the objective of being helpful.

The class isn't nearly as technology intense as my narration makes it seem: perhaps five minutes of a DVD and a succinct series of projected images in each. The bulk really is just me and a book.

I like that Arner essay a lot. I put it up on the Blackboard site for the class as a resource. I'm also placing all the class images there as well.

Thanks for the feedback, Karl!

Thanks for the reference to Arner's article, Karl--although I must admit that I had to grit my teeth upon reading it. Once again the Wirral is conflated with Wales, and English intranational difference is suppressed in favor of the big designators of international difference! My book cannot come out soon enough. :)