Festive Friday: Your Worst Gift Ever 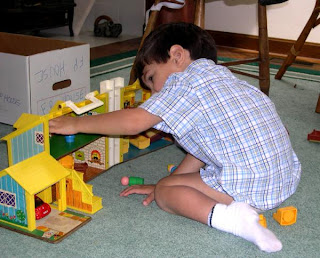 Dr. Nokes recently posted pictures of a medieval-themed childhood birthday present that brought back some memories for me -- mainly, simmering resentment with a patina of vengefulness. After all, isn't that what Fisher Price toys are all about?

As I related in the comments at Unlocked Wordhoard, I had always wanted that big plastic castle, with its trap door and dungeon and working drawbridge. Yet it was my brother who received its pseudo-medieval finery. When I explained my deep hurt to my parents, I was rewarded on my own birthday with the most disappointing present I'd ever received: the Fisher Price House. What a misreading of my desires! This dinky domicile didn't come with a dragon or a queen or a portcullis. It did, however, feature a bed, a stove, a table and a tiny garage. What was I supposed to do with that thing, pretend I was a cast member of the Brady Bunch?

Eventually I did learn that the Fisher Price House made a great set for the staging of natural disasters. Its little plastic cocoon of domestic bliss was under siege by earthquakes, hurricanes, and (most fatally) a mudslide. After the latter, the Parental Authorities declared the house would remain an outdoor toy. I predict that future archaeologists will someday disinter it from the Cohen backyard and declare it a miniature temple with small, peg-like idols for convenient worship.

So what about you? What was the worst gift you ever received? (And please don't say "A copy of Medieval Identity Machines.")

(photo credit: no, that cute tyke isn't me. Cameras hadn't been culturally constructed yet when I was a kid. I found the picture -- with the very house in question -- here).

Posted by Jeffrey Cohen at 6:25 AM

My worst gift ever. I remember throwing a hormone-induced fit (let's say I was 11 or 12) about a package of, wait for it, DEAD ORCS. Yes, little lead figurines representing the ORCS BOROMIR killed. I wanted them, my allowance was tapped, and unbeknownst to me, someone had already bought me some orcs, and they were waiting at home. I sulked and whined all the way from the hobby store to our house. And then, upon discovering my orcs, my dear, dead orcs, I felt humiliated, not because of my family, who were alternately sympathetic, indulgent, and amused, but because of my shame.

So: the worst gift, sort of.

Ooh, I had that house, too, as well as the castle. I was a Fisher Price rich kid, because I had the airport as well. But what I really wanted and never got was the barn that mooed when you opened it.

So I was a pretty well-gifted kid, despite never getting the barn. But once as an adult, my friend the Pastry Pirate, who otherwise is usually a fabulous gift-giver, sent me an Ikea lamp that looked like it was made out of hot pink toilet brushes. *Exactly* like hot pink toilet brushes. Not only was this hideous thing not at all my decorating taste, but her card said, "I saw this and thought, 'This has Virago all over it!'"

I sold it in a yard sale.

I can only remember the good gifts of childhood - a wooden dolls house when I was 5, a small brown teddy bear when I was 4. I still have both of those. For that matter I still have the bear my mother was given when she was five in 1926.

Worst gifts? A set of saucepans from my SO about seven christmases ago - but really this christmas produced the worst gift of all (I am too discreet to say what) - and the two best (a necklace from my daughter and a copy of Pink's Floyd's LP on the dark side of the moon from my son - on vinyl - just like the one I had 30odd years ago. Vinyl is back. We got the deck down from the loft and all our old LPs (well those that have survived) - we had a great Christmas (from Peter Tosh and Patti Smith to 15thc dutch madrigals and benjamin b).