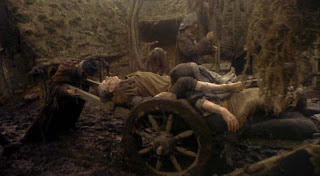 FIRST, read Mary Kate's generous response to Joseph Kugelmass's "why we teach literature" tag, then enjoy this lovely castle, which proves that the Cohens really do know how to do everything, and then, but only then, slide below to fold to learn what my students know about the Middle Ages.

Yesterday, on the first day of my undergraduate Chaucer class, I distributed a questionnaire that asked students to "list three things you know or think you know about the Middle Ages." I had considered assigning Andrew Galloway's Medieval Literature and Culture, finally decided that it was too broad for a Chaucer course, and now wish I had assigned Regine Pernoud's Those Terrible Middle Ages: Debunking the Myths, because most of what my students know or think they know might be called the "Bring Out Your Dead!" school of medievalism.

Typical answers mention the black plague and disease ("it was very disease spread"), social stratification (including the student who wrote "women have no rights"), illiteracy ("ignorance was abundant"; "learning only happened in monasteries"), and the power of the church ("everything was run by the Catholic church or it played a major role in every aspect of daily life as well as running/ruling countries"; "the church was corrupt and greedy"). One or two broke with the pack by drawing on the other parts of The Holy Grail ("knights, armor, castles"). Several students said "feudalism." One mentioned the Cathars and the origins of the novel. Another wrote only that "the world was a terrible place." Some must have taken other medieval courses: they mention Chretien, Boethius, Marie de France, Wolfram von Eschenbach; one remembers, seemingly despite herself, the Wife of Bath ("by continuously marrying a woman could increase her own fortune. (?)"). And some students, bless them, referenced the previous fifteen minutes of class: "English was different from today's English"; "Chaucer was alive"; "Pilgrims were common."

Note that we had just gone over the first 18 lines of the General Prologue, and I had distinguished its opening from typical openings of Middle English poetry: as I told them, it doesn't invoke the Trinity or the BVM, nor does it situate the poem historically, and it delays mentioning England until late in the sentence; it looks to nature, and animal and vegetal reproduction in particular, and couples natural desire and instinct to the 'rational' human desires to go sightseeing and to reward Thomas for his blessings. (I should note that I made no reference to compulsory reproduction, penetration, or gender: I'm saving that for the Knight.) Religious desire is a version or even superstructure of the instinct to "get it on" (exact quote). It's clear, then, that the church hasn't penetrated these lines (at least not in any simply "oppressive" way), that there's writing going on outside the monasteries (since I told them that Chaucer was a career bureaucrat), and as for disease, iirc, it doesn't show its gooey white face until the cook's mormal plops in.

Given its persistence in the face of counterevidence, Bring Out Your Deadism will prove difficult to dislodge. At least, I'll have to point out that women didn't get the right to vote in the US until the twentieth century, that antiseptic surgery dates only to the nineteenth century, and so forth: I'll have to get them to know what is particular to the Middle Ages. The advantage here goes to Chaucer himself, since just about anything he does will astonish their sense of superiority. Then of course I'll have to keep them from claiming Chaucer as "before his time"!

We'll cross that pestilential theocratic bridge when we get to it.
Posted by Karl Steel at 2:13 PM

I have an old PowerPoint presentation that I used to do called "Everything You Know About the Middle Ages is Wrong." I'd put up a series of statements about the middle ages and then offer some evidence to the contrary. E.g., "The Middle Ages were chaste" would be followed by manuscript illustrations of people having sex, and a snippet of the fabliau "The Woman Who Couldn't Hear 'Fuck' Without Having Heartburn." "Times and people were simpler" would be followed by some scenes from the Franks Casket (!) and then an excerpt about the transvestite prostitute John/Eleanor. Etc.

Now I just make a plea to my students: Grant the Middle Ages the same complexity, heterogeneity, and smartness that we grant to modernity. Suspend judgment as you enter the worlds that the literature we will read creates."

I think I just answered the Literature meme as well ...

Now I just make a plea to my students: Grant the Middle Ages the same complexity, heterogeneity, and smartness that we grant to modernity. Suspend judgment as you enter the worlds that the literature we will read creates.

Well put. I wish I could have done the meme justice so concisely.

And Karl -- thanks for giving me the heads up on what I can expect to encounter out there in the "real world." I knew Monty Python was pervasive...but really! :)

I tried asking my students what they knew about the Middle Ages once. The best answer was "Everyone who ever lived in the Middle Ages is dead." I think the student was trying to make a joke. It turned out to be a great starting point for a discussion on what evidence we use to figure out what was happening in the Middle Ages, as we clearly can't t get our information from oral histories!

This is rather an amusing post. Shattering misconceptions of the Middle Ages in the classroom is something I look forward to someday, and I even slip certain things into discussions when I teach composition.

JJC, your PowerPoint especially sounds useful, enlightening, and very entertaining for its purposes.

Also, so that the whole ITM team knows, I have tagged each of you (individually, though I've linked collectively to this blog) for the mutated medieval meme (see here for details).

And JJC: I'd love to see that presentation too.

Brandon: I don't know if I have a favorite historical figure. I might end up interpreting "figure" very freely, but this should be fun. Expect something w/in the week.

I should also say that my students to their credit didn't get things so much wrong as mis-emphasized. The church was powerful; disease was bad; many women do have more professional freedom than they did then; knights, armor, castle: all there!; Cathars too (except see Mark Pegg); and so forth. It's just that there's more there (let's join JJC in calling it heterogeneity) than my students listed, and what they did list is a lot more complex. But I can't expect them to know about the Pope of Avignon or neo-Pelagians or neo-Donatists or the Waldensians or whatever. But, even without that knowledge, they still had the tools right before them for thinking the MA more complexly: after all, they had just read the first 18 lines of the GP! That's what struck me.

When teaching at a certain midwestern state university, where I had a survey of French lit before 1700, I tried doing a few lectures explaining the Middle Ages and why there is said to be a division demarcating them from 'the Renaissance' or 'modernity'. Then I tried putting a question about that on the final exam. Eventually I gave up. I got the usual proof of people just not paying attention, either to me or to themselves: Napoleon discovered America, 'Constantinople' proved that the earth went around the sun. Among the stranger claims was that 'back then' people used pagan myths to make themselves feel good. (Intriguing, yes, but the utter lack of explanation or elaboration on the subject led me to feel that the student was not, in fact, being clever, but just struggling to remember some snippet of something, anything, from those lectures.) The single worst moment, I'd say, was being told that the Renaissance came about because of the Plague, which 'weeded out' the population and after which 'only strong, intelligent people were still alive'. Needless to say this was not exactly what I said in my lecture on that subject. We were in the late 80s and AIDS was being much discussed. I couldn't help feeling that I was being told what this student, and an awful lot of the rest of them, thought about that crisis, which was a very discouraging thought indeed.
sylvia

There's an equivalent bunch of caricaturing misapprehensions and grotesque oversimplifications for the Victorian period: all the children up chimneys, 'the Industrial Revolution' turning cities into Hell etc.