The conclusion to my dissertation is clever. It is sharp and witty and pulls together many of the strands that run through the work, as a whole. It is also simply wrong. I bungled the etymology, and conflated a few Old English terms that I ought not have -- those macrons get me every time. Luckily, I sorted all this out before it became my first book, Maps and Monsters. Since hardly anyone (thankfully) has read the dissertation version, hardly anyone knows about my error, there. I benefited from having figured it out, but nobody else has benefited from this error.

The recent BABEL conference contained many moments of brilliance, as have been evoked by Jeffrey and Mary Kate and Eileen and Steve Mentz and Maggie Williams.

It was, though, not an unmitigated success. There were moments of failure, of stumbling and faltering, of awkwardness and outright error. And this is how it ought to be. If we are serious about embracing experimentation, we must also be willing to accept that not all experiments succeed.

In his plenary on "How the Hippies Saved Physics," David Kaiser discussed Neils Bohr, who was famously wrong in his model of the atom. While he was utterly mistaken about how atoms are composed, his errors were generative, spurring a generation of physicists and their research.

In discussing this subject, Shyama Rajendran and I came to wonder about the utility of being wrong. In the sciences, when an experiment fails, the results are often published so that the scientific community can benefit from the errors, can learn from the errors, be they algebraic or conceptual. In the humanities, we are less often demonstrably "wrong," since much of what we offer is interpretive rather than factual. You might disagree with my reading of the Donestre in the Beowulf Manuscript's Wonders of the East, but you would be hard-pressed to conclusively invalidate it. Still, we falter and fail all the time. However, many of us in the humanities are still in our 19th-century paradigm of the lonely scholar, toiling in the solitude of a garret, perhaps with a glass of absinthe at the elbow. And so our failures are solitary, which renders them of less use than they might otherwise be. When I head down a wrong-headed path, I (hopefully) learn something. But you don't, unless I share my failure with you.

Shyama and I therefore propose to create an Academic Failblog, as it were, a place for any and all of us to post our scholarly missteps for all and sundry to read and learn from. These might be related to research, teaching, job searching or any other aspect of the academic world. We have bandied about a few titles:

[Grandiloquent]: "Before the Phoenix Rises: Swimming in the Ashes of the Humanities."
[Goofy]: "Faceplanting: Tripping Over the Scholarly Cracks."
[Self-Abusing]: "Head, Meet Desk"

All are probably wrong, but perhaps one or more is productively so.

Shyama and I offer this post to accomplish three things: First, to see if there is interest in such a venture. Second, if so, to garner suggestions for titles. Finally, assuming 1 and B go well, to get the discussion rolling forward, so that when we have the site up and running, we have a stable of eager participants. What say you? Care to stumble with us?

The Lives of Objects

A short piece from the GW Research blog on Animal, Vegetable, Mineral: Ethics and Objects, Oliphaunt books, and two fossils in my office (one is wearing a blue shirt).
Posted by Jeffrey Cohen at 6:02 AM No comments:

The BABEL conference was so intellectually sumptuous that I despair of attempting to capture the event.

Rather than imagine a post that I'll never actually be able to compose, I will observe that BABEL included but was not limited to the following: moments of transformative intensity; the pleasure of witnessing participants thrive; impossibly late nights; endemic collaboration (especially nontraditional and emotionally fraught modes); risks; presenters who crafted new ways of performing overcome by the radiance they triggered (I will be saccharine: such smiles of achievement. They make me happy to think back on them now); celebratory silliness; celebratory seriousness; love; some papers that could have been offered at any conference, and some moments of surprising selfishness (how can someone not see the arrogance of allotting themselves twice the time that any other speaker takes?); antagonism and occasional snark (I'm always irritated by that moment when instead of dwelling upon what a plenary achieved academics assert why they would have done better); a pervasive willingness not to dwell upon error or failure (the necessary followers of risk taking: not every experiment culminates well) and an ebullient desire to see beyond such rare founderings; intimacy; multiple sensory modes; synaesthetics; fermentation, cultivation and the wild; catching up with many people close to my heart, and connecting to many more; being annoyed; being annoying; angelic messengering; community; lambency and late night pastry eating with an edge of danger (who knew you could go to jail for talking about the future of the university too loudly at 3 AM?); what Tony Fry inspirationally called rethinking how to make things, unlearning, moving beyond inherited academic structures, decolonizing epistemologies (that might sound like mere jargon but taken seriously it's an important injunction), and the Urmadic Academy ("educational institution without a place").

Most importantly, though, BABEL was for me about friendship as a mode of field change. With Eileen, I state for the record in these computer pixels generated from my own blood (I swear they are) that I am weary of those who critique or disparage BABEL as a cabal of friends -- as if friendship were easy, as if friendship were not a contentious, complicatedly open space for affinity, alliance, sustenance and challenge. Real friendship, utter friendship, doesn't reinforce your comfort in the identity you already possess but unlocks a space for becoming someone better, a roving mode of companionship rather than an exclusive celebration of what already exists. Amity is a difficult endeavor. Friendship should be joyful, but sometimes it hurts. It's all about the futural, and avenir is heavy.

After the conference some of us spent another day in Boston dreaming some possibilities for the next BABEL convocation (Santa Barbara 2014) as well as thinking about the structure of the group in ways that could make it more widely collaborative and its labors better shared. Right now, most of BABEL's work is conducted by a fairly small number of dedicated people -- and, to be honest, despite the generous support of many institutions and individuals for the conference itself, the financial resources required to enable BABEL to realize its immodest ambitions need to grow (DONATE). Eileen, BABEL's sine qua non, presiding genius and ceaseless dreamer/schemer/ingenitor, will be sharing more about the working group's thoughts soon, and will make a plea that I hope everyone realizes is genuine: this enterprise requires many hands and is always seeking supporters, volunteers, friends. And also: filthy rich donors.

I'm debating if I will share the text of my plenary ("The Deep and the Personal") here, only because it would be a fragment of a whole that cannot be recomposed. Lindy and I each delivered a short piece that we thought could characterize a mode of performance central to our discipline, and then we sat together on two chairs at the front of the room and spoke to each other about big questions; inhuman time scales; the challenge of communicating what we know in ways that are heard; beauty; dwelling between disasters; the responsibilities of the intellectual in a time of intellectual antipathy, both towards science and the arts; the possibility of changing the world. Yes I really said that: changing the world by changing how we inhabit the world. We had prepared no material ahead of time for the culminating interview. We did not even know each other all that well: we'd had a lunch together in July, and some email interchanges. But collaboration works only when you trust your collaborator enough that you know they will push you, make you uncomfortable, ask you questions to which you possess no easy answers, journey as your companion to spaces far beyond your comfortable mastery of certain small topics. Collaboration is like amity a mode of transformative challenge. Is it any wonder that Lindy and I started the shared plenary as a scientist and a humanist who had in common an obsession with rocks and catastrophes but were not sure what if anything else, and that we ended the event good and (I trust) enduring friends?
Posted by Jeffrey Cohen at 10:12 AM 1 comment: 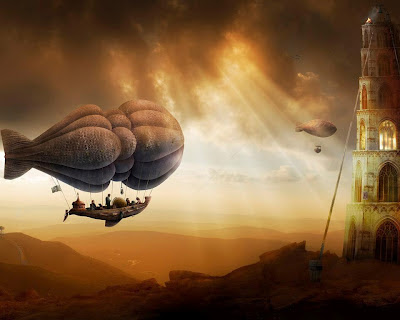