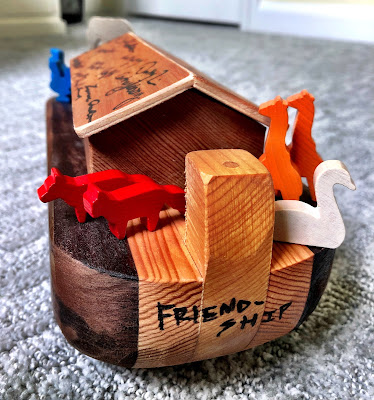 And this blog will forever seem a virtual home. I'm not leaving In the Middle, not at the moment, but I imagine that if I continue to blog here what I offer will be less frequent and rather different in content. My wonderful co-bloggers have the chance to reinvent what this site is and does; nothing would make me happier. That, to me, is the best kind of good-bye: one in which space opens for others to thrive. A well built home endures for a long time, even if at some point it no longer resembles what it once was.
Posted by Jeffrey Cohen at 1:38 PM 2 comments:

A Brief Talk on Animal Lives


Just wrote this thing, for the "Channeling Relations" medieval conference at the Graduate Center, May 4, 2018. The program looks fantastic, and I'm proud to be part of it.
The hand of the Lord was upon me, and brought me forth in the spirit of the Lord: and set me down in the midst of a plain that was full of bones. And he led me about through them on every side: now they were very many upon the face of the plain, and they were exceeding dry. And he said to me: Son of man, dost thou think these bones shall live?

In part, my goal in doing medieval animal studies has been to try to give flesh and life back to animals. Of course, medievalists do that with people too, but the tendency for decades of medievalist writing about animals had been to take animals as medieval symbolic schemes took them: chiefly as textual. The old method is effectively an extension of the medieval genre of the bestiary, whose various entries on animals, and sometimes stones, and sometimes humans themselves, begin with a compendium of natural history - what we might call the 'real' of the animal - before swinging into Christian moralization. That is, the older method of reading medieval animals had been to concentrate on animals as if they had a final cause, namely, what they meant symbolically for us, as if understanding that was sufficient for giving us something like the truth, because a symbolic truth produced with a clerical imprimatur, that is, with the approval of trained intellectual, would have been presented as the truth.

Giving life back to animals means working with less certain materials, with a mind not just to the final cause, but also to the material, formal, and efficient ones, as well as the ongoing cause of the thing itself, distinct from whatever end it ends up as. Sometimes attention to this rich range of truths requires working with the history of interest, an attention to the way that animals drew culture makers -- writers, visual artists, and so on -- to dwell with them as something more than mere opportunities for thought. It wasn't the symbolic use that first drew them on: the symbolic use feels very much like an arbitrary schoolroom exercise, sometimes quite calcified with centuries of hermeneutic habits -- the eagle's ability to look directly at the sun is predictably a model for the life of a holy person -- and sometimes quite arbitrary, with no particular or necessary attachment to the animal on hand.
What drew culture makers to dwell with the particular animals was not only the desire to make symbols, but also, and perhaps even but also primarily the body and ways of the animals themselves.

More than a decade ago, in his "Inventing with Animals in the Middle Ages," Jeffrey Jerome Cohen observed that the various nonhuman lifeworlds of animals - the gender complexity of hyenas, the fact that bears literally lick their cubs into shape after they're born, and so on -- offered humans a chance to imagine other ways of life, not so predictably bound to being merely human.1 In some sense, material like medieval natural science – a man will lose his power to speak if a wolf sees him before he sees the wolf, but he can regain his voice if he takes off all his clothes – is something like medieval science fiction, an imagination of what else the human might be, to the extent of losing human difference altogether. Many of you here will of course be thinking of “Bisclavret.”

And yet that’s still about what the animals can do for us. A more animal-focused approach might be inclined to want the data provided us by archaeology. On Monday, in Leeds, a graduate student offhandedly told me about work she’s read about evidence of dietary differences between working dogs in the country and companion dogs that lived mostly indoors: I’ve yet to be able to track down the article, but I thought I’d mention it here on the off chance that one of you knows about it. And just yesterday, I found an article on a dog skeleton discovered in Southwestern France; it had been buried, quite deliberately, during the 11th or 12th centuries. Of average size, the dog had suffered broken bones on at least three separate occasions, but there is no evidence of its carcass having been abused, or its having been skinned for its fur, or butchered for its meat.2 A victim of abuse, it was also cared for in death. We can put flesh on the dog by imagining its grim life, its being beaten by what Chaucerians know as yerdes smerte, and by wondering whether the person who buried the dog was the one who beat it, or the one who loved it, or both.

We can give animals more life by not just attending to how we dream new lives for ourselves through their exotic bodies and capacities, and not just by relying on so-called “brute matter” offered us by archaeology--—the brute matter metaphor, incidentally, may date, in English anyway, to Robert Boyle, in 1686, on God as divine clockmaker3. The material of brute matter calls out to us in the voice of truth, which they seem to have because it exists whether or not we’re there to take notice of it. But of course life is a truth too, as are shared lifeworlds, which means we have to attend to narrative, to the way the animal unfolds itself through its own time and space, sometimes with us, and sometimes for reasons that are not for us at all. As I’m nearly out of time, let me just point you to the Life of Cuthbert, to remind you of the story of the horse that gnaws on a thatched roof, dislodging a loaf of bread: the horse’s appetite feeds the saint, who, in gratitude, and to preserve his fast, gives half the loaf to the horse.4
Thank you.

1 Jeffrey Jerome Cohen, “Inventing with Animals in the Middle Ages,” in Engaging With Nature: Essays on the Natural World in Medieval and Early Modern Europe, ed. Barbara A. Hanawalt and Lisa J. Kiser (Notre Dame: University of Notre Dame, 2008), 39–62.↩

3 Timothy Shanahan, “God and Nature in the Thought of Robert Boyle,” Journal of the History of Philosophy 26 (1988): 558. He develops his example by pointing to the clock at Strasbourg.↩