Readers of this blog will not want to miss Nahir Otaño Gracia's superb reflection on the recent MAA meeting -- and a more capacious framing of what the Middle Ages should be: "Welcome to a New Reality! Reflections on the Medieval Academy of America’s Panel: "Inclusivity and Diversity: Challenges, Solutions, and Responses."" The piece is featured at Medievalists of Color website, which you really ought to bookmark.
Posted by Jeffrey Cohen at 11:07 AM No comments: 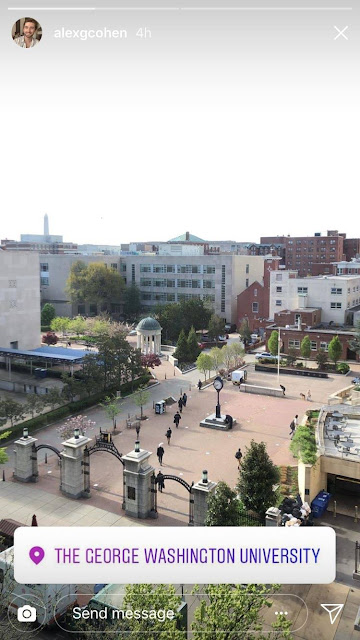 I could not ask for more.
Posted by Jeffrey Cohen at 4:29 PM No comments:

The Pull of the Sky 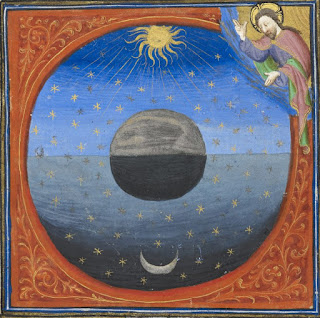 Well I missed Earth Day with this ... but readers may interested in the piece I wrote for a new platform called Emergence Magazine on "The Pull of the Sky." The illustrations are pretty wonderful if I do say so: some of my favorite medieval imaginings of the Earth as viewed from space.
Posted by Jeffrey Cohen at 3:26 PM 2 comments:

BABEL is delighted to announce the four winners of the 2018 James J. Paxson Memorial Travel Grant for Scholars of Limited Funds, generously co-sponsored by punctum books. The Paxson Grant supports scholars’ participation in the annual International Congress on Medieval Studies at Kalamazoo. This year’s winners are (in alphabetical order)

Check the ICMS program for presentation times and locations.

We received many, many strong applications this year, and the difficult decision among them was made by a committee of five judges: Heather Blatt (English, Florida International University), Joshua Eyler (Center for Teaching Excellence, Rice University), Shirin Fozi (History of Art and Architecture, University of Pittsburgh), Nicole Lopez-Jantzen (Social Sciences, Borough of Manhattan Community College, CUNY), and Mo Pareles (English, University  of British Columbia). Many thanks to these scholars for generously sharing their time and expertise.

We’d also like to thank the many donors who contributed to last year’s BABEL fundraiser. They – together with punctum books – made this year’s grants possible! Be on the look out for a new fundraising initiative from BABEL that will be kicking off this summer….

Please join us for a reception at #Kzoo2018, co-sponsored by BABEL and the Material Collective, where the winners of the Paxson grants will be recognized. It will be a fun happy hour on Thursday, May 10, at 5:15 pm in Fetzer 1045 – and everyone is invited!

Finally – BABEL is looking forward to sponsoring our annual evening at Bell’s Brewery, which will take place on Friday, May 11, starting at 9 pm. PLEASE NOTE: there will be somewhat fewer free drinks this year than the previous ones; we have $500 worth of drink-tickets reserved for non-tenure track / contingent faculty, graduate students, and self-identified members of the academic precariat. Come by circa 9pm to get yours! And of course, EVERYONE is welcome & encouraged to enjoy the evening.

Posted by Jeffrey Cohen at 8:03 AM No comments:

"I regret that our response must be disappointing."

"Of Giants reads like a hastily written dissertation hastily rewritten soon after graduation.  It might have been better in its original form -- or at least less sloppy ... The book contradicts its own generalizations with gay abandon ... His carelessness about his own ideas is echoed in a carelessness about the ideas of others ... What then is even the purpose of the book? It does not offer new scholarship (Cohen is in fact scrupulous in giving credit to scholars and critics  whose work he depends upon). It does not theorize a new function or significance for giants. It does not offer new readings of either canonical or underrated medieval texts. It does not set itself up as answering any question I can remember here at the end of the reading experience. I was continually wondering why it existed ... I'll attach a page or two of my eleven pages of quibbles as a sample."

The two dense pages of quibbles that follow range from complaints about the "deranged reference system" to wondering how metaphors generated around discussion of AIDS could possibly have anything to say to the Middle Ages to the declaration that "'envalue' is a horrid neologism" to insisting that xenophobia and racism cannot apply to medieval imaginings of Ethiopians or other Africans because "they are not living in close contact" to anyone in Europe to the exclamation that the work "makes no sense!"

And thus Cornell University Press rejected my future book Of Giants with a typewritten, four page reader's report. I was working as an adjunct at the time and was close to giving up on an academic career. This manuscript review nearly finished me. But I decided to give the market one more chance, and a year later was moving to Washington DC to begin a new life as an assistant professor at George Washington University. Oh the memories you find when you are purging files in your house in preparation for moving.

(This post is offered to anyone who has ever had a nasty peer review of their work. Remind yourself: we are in good company.)
Posted by Jeffrey Cohen at 4:27 PM 1 comment: