a home to distant wanderers

I realize that I have been using Facebook to microblog the New Chaucer Society conference (#NCS16), among other things, and that not everyone has or wants access to that gated community. Here's a post I published there to sum up the feeling of being London in the wake of Brexit. I attempted to remain hopeful; you will let me know if I succeeded. 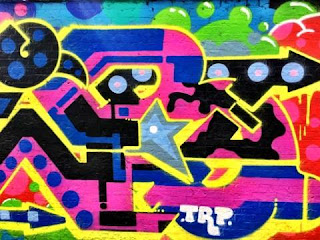 On my last full day in London I decided not to undertake the Canterbury pilgrimage with my conference friends but to create some quiet within a busy week. In the morning I walked around Shoreditch, Spitalfields, and the East End, fascinated by the street art -- as well as by the young people from around the world attracted to that art. I met Anthony Bale for a celebratory post-conference detox of mint tea at a Redchurch St coffee shop, and he observed that this area (now the Brooklyn of London) has changed so much from when some of his family lived there. A sense of connectedness, it struck me, would be difficult to maintain to its trendy incarnation, with its overwriting of the past -- often through beautiful spray paint. I know I feel this way about Cambridge MA, where my great grandfather built staircases in Inman Square but no one in my family could now afford a home. 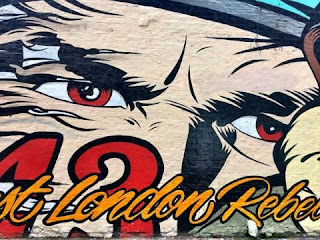 In the afternoon I spent some time sitting outside a pub, nursing a pint and sketching the road map to a review essay. London's public spaces are wonderful, created for lingering. DC is too busy to encourage anyone to sit anywhere for two hours just to think. On the way back to my flat I walked over (literally, because you view it from above on sidewalk replaced by glass) a subterranean artwork by David Teager-Portman called Choosing the Losing Side (2014), placed next to the remains of a Roman wall excavated at the making of the current market. Two figures in a tableau of death and discovery, the installment reminds me of the uncovering of Spitalfields Woman, a young Roman who had been buried with objects and oils connecting her to the Mediterranean and a wide world. London has always been bigger than itself, a home to distant wanderers. 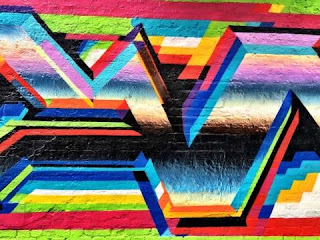 This errant theme was made palpable after a Brick Lane dinner with an assortment of favorite people: Kathy Lavezzo, Dorothy Kim, Farah Mendlesohn, Edward James, Tom White, Dan Remein, Julie Orlemanski. The meal was pure serendipity. I'd simply placed a note on Facebook that I was reserving a table for friends and strangers to join, and this collection of people who did not all know each other (some medievalists, some not) coalesced and, I hope, are now fast friends. Over curry Farah told us what it was like to grow up in the East End, and afterwards took us on a walking tour of some its buildings and homes. Intermixed with its Jewish, Irish and Bengali histories is a French tale of Huguenot refugees weaving silk in specially designed buildings, which you can now spot for their huge windows and multistory layout. I admit we peered into strangers' houses on quiet roads and imagined what it was like to live and work in these spaces. Farah stressed throughout her impromptu tour the long history of the area to protest and dissent. Nearby for example Oswald Mosley thought he would lead a Saturday march of his fascist supporters down Cable Street, but the Jews did not stay in their synagogues as he planned, flooding the streets to block his Blackshirts and deal his antisemitism and toxic nationalism a rather stinging blow. We ended at the magnificent Christ Church Spitalfields, where Edward told us about the excavations that yielded lead-lined caskets ... with bodies so well preserved in them that the archeological teams needed trauma counseling after their opening. Not every message from the past is a story affirming to tell, but resonates all the same with something of the moment into which it arrives. 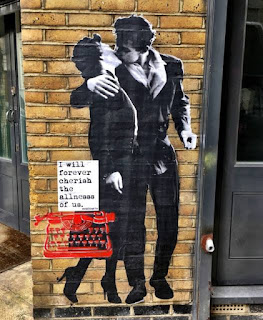 I don't know what a post-Brexit London will offer. If this little slice of the radical East End excavated mainly through the passions and memories of friends is a small indicator, I can predict that impurity, coalition, dissent, and alternative stories are going to endure. Struggle is a synonym for future. Walking back to my flat last night, thinking about the friends and strangers in whose company I passed the long day -- and the people with whom I spent a week at a conference devoted to an author who well knew that the world is full of difference (even if he was at times oblivious to the violences that he reinforced in telling stories of that world) -- then the persistence of challenge to easy narratives and resistance to homogenizing force seems to me clear. Surely there are some neighborhoods like the East End where better visions of living together are being advanced through protest and alliance. But surely also we possess wide communities of conscience, alliance, affinity, and resistance that are also working (in multiple registers) to ensure that the present does not betray the boisterous heterogeneity of the past, that the future is better (more affirmative, more queer, more inclusive, more diverse, more difficult) than the reduced prospects we have been told to expect.
Posted by Jeffrey Cohen at 5:14 PM