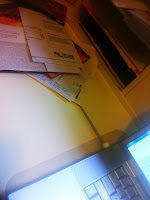 That acronym stands for "Too Much To Do," for those of you not fluent in Text. Five hundred years in the future, only medievalists will study this arcane language, but for now -- since Text is a living tongue -- fluency is not required and you do not have to take a proficiency exam to obtain your PhD. I hope that comes as good news, especially if you are drowning in work like I am. And unlike many people reading this post, I'm not grading papers.

Yes, I know, it's my footloose 'n' fancy free period of fellowship leave, but it's also been a span of months in which I committed to projects and travel long before I knew I'd be funded to compose a book. So that stone stuff? Haven't thought anything lithic since early February. Or maybe it was January. It's been all about the other elements: for a "Fire" essay I co-wrote with Stephanie Trigg, and used a portion of at the Exemplaria symposium; for a presentation I gave at EMU with Tim Morton; for my watery response at SAA; for the "Ecomaterialism" essays I'm co-editing with Lowell Duckert, as well as for the yet to be composed introduction to that issue. It's also been all about the zombies: first version presented at ICFA (and revised already into a journal article), second conceptualization to come at "Sensualising Deformity" in Edinburgh, mid June. Right now it's also about the colors as the Prismatic Ecologies due date looms. I have to edit those essays and compose an introduction. And, as icing for this scholarly cake, the proofs for Animal, Vegetable, Mineral: Ethics and Objects have arrived. This first book in the Oliphaunt series (via punctum) will be out in time for Kalamazoo. And it will be beautiful.

Speaking of Kalamazoo, I have organized one session and will be speaking in two others. And don't get me started about NCS this July ... On top of that there are the field and qualifying exam lists, the dissertation moving towards defense, the GW MEMSI annual report, and blah blah blah (which in Text would be written Bx3).

Intensity of work has a black hole effect, spurring other intensities to be drawn towards its maw. When life is at its busiest, that's when other things begin to exert their ability to trouble. Chez Cohen we've been dealing with the repercussions of a son who became addicted to video games, to the point at which his grades plunged and he deceived us about what he was working on (he no longer has a computer in his room, and his X-Box has been sold: these were his own solutions, even as at almost 15 he knows the struggle will be constant). Our daughter meanwhile now has the torture device known as a palate expander in her mouth. It hurts, makes her drool, and impacts her ability to speak clearly. And do I need to remind you of how cruel eight year olds are to children with too much spit in their mouths who cannot articulate their words well?

As it turns out, teaching or not, the middle of April inevitably brings on the stress.
Posted by Jeffrey Cohen at 8:07 AM

I printed this out and brought it to my linguistics class, where we've been talking about (among other things) language change and technology. One of the students pointed out the irony of using "tongue" to refer to a language that's entirely written (although I did point out that people say "oh em gee" and "el oh el."

Heide, I love that: thanks for sharing. Did anyone in the class realize that I'd made up the text abbreviations in the post? That's the thing about texting: acronyms proliferate so quickly that we always assume that if we don't recognize one everyone else still knows what it means...